Sleep training was an absolute mystery to me!

To be honest before my son was born I didn’t know sleep training was a thing. I just thought babies slept when they were tired. I know that’s pretty naive of me, but still true.

If you read my post, Sleep…A Crazy, Mysterious Mistress, you got the background of our baby sleep struggles and boy howdy did we struggle.

Some affiliate links included at no cost to you.

Before sleep training we basically let our baby sleep anywhere because we didn’t know what do to!

Everyone I talked to about sleep training made it sound so easy.

Meanwhile, I was terrified to put him down because I knew I would wake him up from his sleep.

So, that means I didn’t sleep. Like ever. I was pretty much scared and tired…all the time.

I was exhausted and my baby was exhausted, so I was just trying to get him to sleep how I knew he would without many tears shed(for both of us).

All the Places He Slept Before Sleep Training

I never thought I would co-sleep but a serious lack of sleep will make you do a lot of things you didn’t think you’d do. Like put the coffee pot in the freezer.

He slept in my arms…

This was at one time the place where he got the best sleep. But, once he turned 5 months that was no longer the case. He would wake up uncomfortable and unrested …and usually screaming.

He slept in the Rock N Play(a lot)

The biggest challenge with this was the transition from our arms to the Rock N Play (no, we did not master the putting him down while he’s still awake).

We have a smart, ninja baby who could sense anytime he was not in human contact. So, sleep anywhere that wasn’t near us (more accurately on me) would not last long.

Also, I’m now aware that letting your baby sleep in a Rock N Play at night is extremely dangerous. We will not be doing this one again. Did I mention I was naive and sleep deprived?!

After all these different sleeping obstacles I came to a breaking point. You know the kind of breaking point where you lose your stuff?

And of course it happened in public at his 6 Month old check-up. I had a pretty good sized break down in the pediatrician’s office over sleep. Yup, I’m that lady.

The pediatrician was telling me how important sleep training and schedules are for babies and I just sat there feeling like a big ‘ole failure. So, I cried…A LOT!

Related: How Dads Can Help with Breastfeeding

How we Finally Had Sleep Training Success!!

But, I come bearing good news! Things turned around. We figured it out (for now) .

I got way bogged down with all the different research that said their sleep method was the best for baby sleep and the only one that would aid you in raising a successful human.

I didn’t want to let him cry it out but I also didn’t want hi to sleep in our bed (which he was at the time).

It just all felt like a lot of pressure to make the right decision but I had no idea what that was.

After endless hours spent researching the different sleep methods and the pros and cons of each. I finally found some hope (enter hallelujah chorus)!

The #1 Thing That Changed Our Sleep Journey

This book, Secrets of the Baby Whisperer!

I found this book and everything changed.

I’m not even exaggerating, I promise! Secrets of The Baby Whisperer changed my life!

Sure the front cover is from the 80s and I’m not a great reader(something I’m trying to change about myself), but I read this sucker from start to finish. After reading it I had a plan and I was ready to make some changes.

I created a sleep routine

This does not have to be anything grand just whatever works for you. I got hung up on this for a long time. I wanted it to be the perfect routine that was special, but in reality he just needed something that was consistent each time I put him down for a nap or nighttime.

Read a book, say a prayer, stand up and rock while singing a song and then put him in his crib while I finish singing the song and he was still awake. But, you do you boo boo.

Whatever routine you start for your little one is what they’ll come to expect and what will make them feel safe and be perfect for them.

Be there, but don’t be there

I would watch him on the monitor(like a hawk). If he started crying, which he definitely did at first I would go back in and assure  him that I was there. Then I would stand by his crib and shush him and touch his head and as soon as he was soothed. I would stop and then leave the room.

I continued this process until he was asleep. In the beginning this process took a while but it was better for me than hearing him scream for an hour (which we tried and it didn’t work for us).

If your baby starts to squirm or cry a bit, don’t run right in. They may just be repositioning and getting comfortable. If you go in too quickly you mess with their natural ability to get theirselves back sleep.

Then after about a week of doing the same routine every day Foster knew what was going on. He knew what it was time for and he just went to sleep when I put him in his crib. This was a big stinking deal in my household! 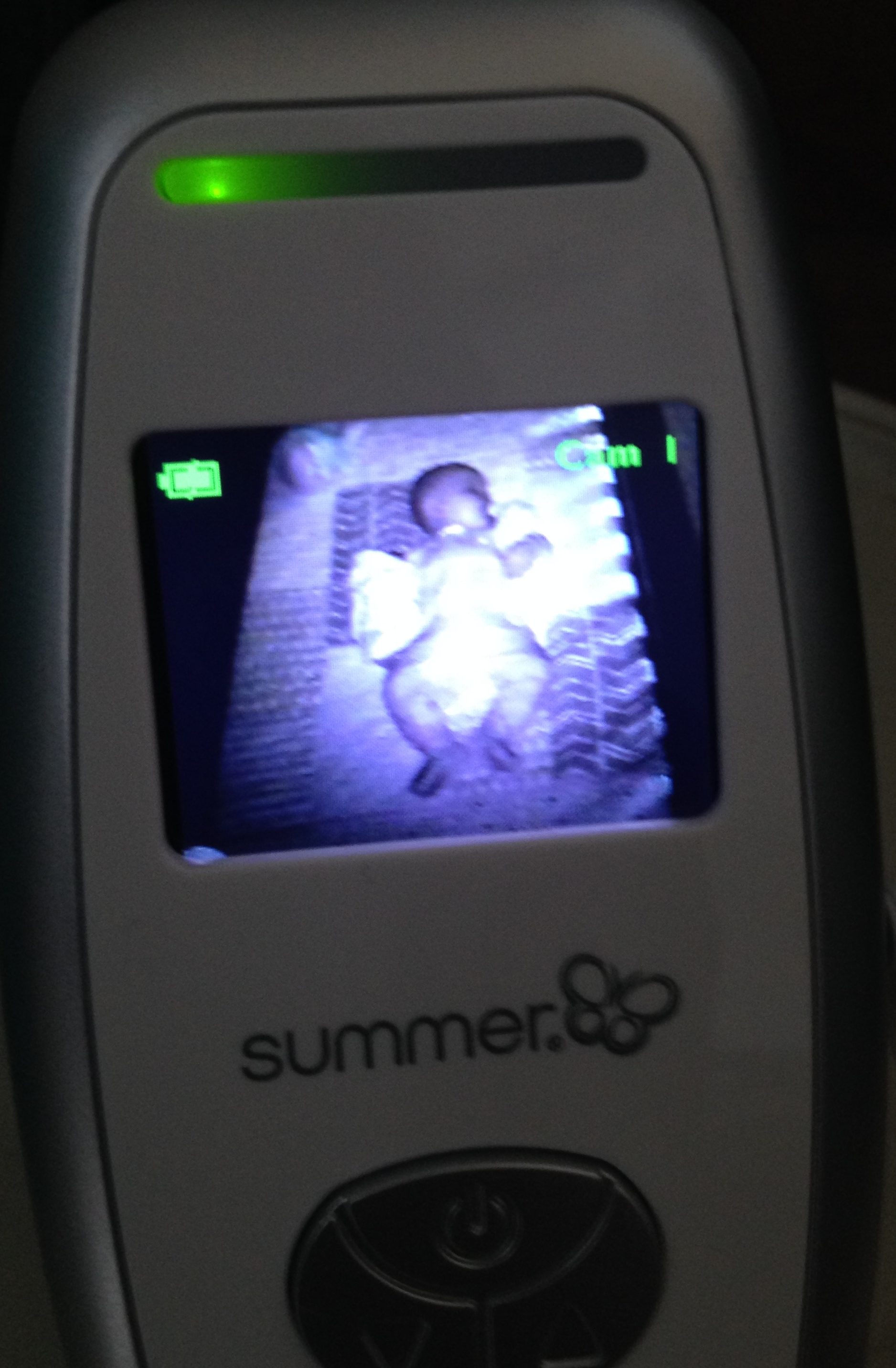 This is the first miraculous picture taken of Foster sleeping in his crib at night time!!! Yes folks, he slept in his crib and not in bed with us.

This meant I could move freely about the bed and not worry about hurting our sweet baby boy.

I also learned something about Foster that first night (because honestly I just stared at the monitor the whole night). He loves to toss and turn in his sleep!

It made total sense. That’s what was waking him up when he was in my arms or sleeping in bed with me. He didn’t have room to move around and find a comfortable position for himself, so he would just wake up annoyed.

Now that he was in his own space he was free to move about as well…just like his mama.

Within the first week he was sleeping in his crib and sleeping through the night! I felt like a brand new person and I could tell he felt so much better!

When you are sleep deprived everything else just seems out of whack as well! After all sleep is a need not just a want (but believe me it is a big want too!)

Things to Remember about Sleep Training

I also want to mention that he was 6 months when we did this. I know there are many people that have success sleep training way earlier than we did. But, for us I think his age played a big role in our success. I tried a similar approach when he was 4 months and it did not go nearly as smoothly.

Last bit of advice…believe in yourself. Know you can conquer this sleep thing. I promise babies can sense fear and I was terrified at first.

But, after reading Secrets of the Baby Whisperer I became exponentially more confident and I think my little man felt that.

I know sleep is a big deal and you can get desperate after a while. I’m not trying to make this sounds simple because it took me what seemed like forever to figure it out. But, I  promise, this book and these sleep training steps were a game changer for me!

So, if you are having sleep problems take heart. Please know that if I can do it…you can surely do it!!

**oh and full disclosure…I’m fully aware that sleeping situations can change at a drop of a hat but I also have more confidence in my abilities now and I don’t plan on changing that. So, I know whatever changes happen I can handle them. Please remind me of this later on when I’m stressing about who knows what. **

I would love to hear about your sleep training journey in the comments below!