I was never happy with how I looked and always compared myself to others. My negative self-talk told me I should be taller, shorter, thinner, my face should be a different shape. The list goes on and on and on. I absolutely never felt beautiful or attractive.

Unfortunately this cycle continued through college and even into my early married years.

As a result it led to some really unhealthy eating habits. All in attempt to reach a “look” I’d never achieve.

In reality I was trying such extreme tactics that I could never sustain. Things like the Master Cleanse which turned into just not eating much of anything. Or I’d tell myself I’ll I’ve eaten bad today so tomorrow I won’t eat anything. Then there’s the “don’t eat anything except peppermints” thing. And a slew of other unwise things to do to my body.

In the end I’d always end up eating all the things and gaining weight from it. It was just a horrible self-defeating place to be.

I was in a unhealthy brain space about myself  and it effected every other part of my life. It made me think inward so I was missing out on opportunities.

This is not the way I wanted to live and I knew it was unhealthy for a long time but I also didn’t know how to stop.

Even as I right this it saddens me to say that these sort of body image issues continued well into my marriage. Actually being married made me a little more aware of my body and its flaws because now someone else was looking at my body and I was so paranoid that he was judging me the way I was.

In reality he sees me in a way that I will never see myself but I could not recognize that at the time.

Actually being married was what forced me to look for help and held be accountable to someone else besides myself. So, I guess in some way I can thank my husband for helping me break free from body image issues.

With the right people in my life, some helpful books and A LOT of prayer I have been able to do an over haul in my  way of living/thinking. It has definitely been a journey and I still have my triggers, but I can honestly say I’m a different person now than I was six years ago.

I’m not trying to make it sound easier than it is because nothing about it was easy. I was forcing myself to think in a different way than I had in years! But, this new way of thinking was setting me free from only seeing myself in a distorted way.

Resources that Helped Me on My Rode to Freedom

This is a group I found after Googling undiagnosed eating disorders and this is one Google search that did not lead to me thinking my left toe was going to fall off or that I contracted some disease from the Oregon Trail.

It led me to a supportive group of people who were just like me and wanted to be set free!!

I attended meetings at a local church where I learned that all foods are okay, community matters and that God cares about my freedom.

Life Inside the “Thin” Cage

This book talks all about the unrealistic standard of beauty in today’s media. This standard has caused many women to become trapped in a never ending pattern of chronic dieting and an unhealthy body image.

It was good for me to hear from someone going through something similar. You see, I never talked about it to anyone. I felt like I was the only one that thought like this and there was definitely something wrong with me.

The author makes you feel like you are not alone and gives you a way out!

These two resources plus my supportive husband are what made all the difference in my journey to body image issue freedom! If any of this resonates with you I highly suggest you at least checking those two things out.

A few years after being on my rode to freedom we felt like it was time for us to have a baby! So very exciting but of course this would be the biggest change my body had undergone. 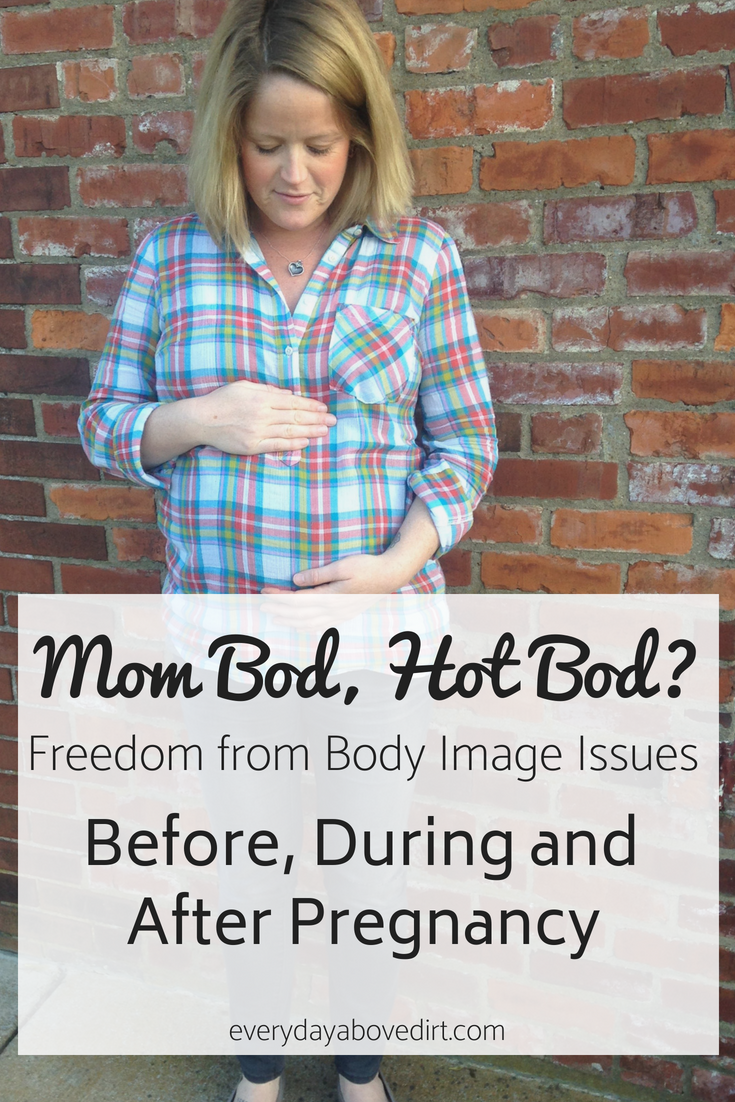 Knowing this body image baggage was in my not so distant past you can only imagine that the thought of the physical changes that come with being pregnant would scare the pants off me.

I knew it meant my body was about to undergo a major transformation and be stretched to the limits (literally). I knew that getting pregnant meant “gaining weight” and undergoing my biggest body shift yet.

So, I had an inward battle. If I were able to get pregnant it would be an absolute miracle from God but there was still the nasty lingering thought about how I would handle my new body.

I’m not going to lie. I also worried about what people would say about or to me. Somehow when you are with child people think they have free license to comment on the way you look. “Wow, you’re huge!!” “Are you sure there aren’t twins in there?” “You look like you are going to pop.”

All things people to say to women who are creating a human and all of them are incredibly hurtful to someone who’s on rocky ground with the way they see themselves. I could just envision myself having a total melt down on a daily basis after hearing people’s lovely comments on my growing belly.

I always told my husband that I was going to just give that gift right back to them and say, “Oh, you look like you’ve put on a few pounds?!” “You’re hair is looking rough today” or “Did you pack on some LBs over the holidays?” I mean it’s only fair. If they can freely comment on my body and what they think of me, I should be able to return the favor, right?!

Up until I actually got pregnant I was still apprehensive about what would happen to my body and my thoughts about it once I was actually pregnant. Then I GOT PREGNANT and something changed.

I wasn’t scared anymore. All the worry and stressing about what might happen was for nothing(that’s usually how it goes). The minute I saw my pregnancy test result and saw the word “pregnant” I didn’t care as much about how I was going to look. I just cared about my baby. There was a human growing inside of me!!!

My mind shifted to the absolute miracle side of being pregnant and what that meant, a life was inside of me. Every day I would check my pregnancy apps to see what they said was going on with my little baby.

I loved seeing the different fruit or vegetable sizes he was (there’s an app for that:)). I think I got so focused on my son and his development that there wasn’t as much space in my brain for self doubt or deprecation.

Believe me I had plenty of other worries in regards to my pregnancy and of course I had moments where I felt huge and unattractive. Oh and it still hurt my feelings when people commented about my belly or breast size (yup, that happened). But, it didn’t effect me like it did before I was pregnant.

It didn’t shake me to the core like I feared it would. I had a new appreciation for my body. I knew I needed to take care of it because my little baby was in there! It wasn’t just all about me anymore. I was gaining weight but I was also gaining a life! The most little precious life that I’ve ever known!

So, for the first time in my life now that I am a mom I appreciate my body. Not because of what it looks like, what I eat or how much I exercise, but because it nurtured my son for 9 months and gave me the best gift I’ve ever received!

But for now, mama friend, please know that you are stronger than you think, your body is an absolute miracle and you have a hot mom bod!!