The last time I gave a Foster update he had just turned 13 Months. He’s now 17 months, so I’d say it’s time for an update!

I absolutely love reading about other mom’s and their little ones, so I’m hoping you enjoy the same. It’s mind blowing how quickly they change and what they can literally learn in a day or less. I have to say that every stage of Foster’s life has been absolutely incredible. Lately, his little personality has really taken off and it’s such an honor to see him develop into an amazing little person. I have a lot of updating to do, so let’s get started!

Movement(Independence): Oh my goodness…movement….yes!! And lots of it! I remember when movement consisted of him attempting to roll over or lift his head. Now movement involves trying to jump off the bed or climb over the back side of the couch. So, it’s safe to say there is lots of movement! 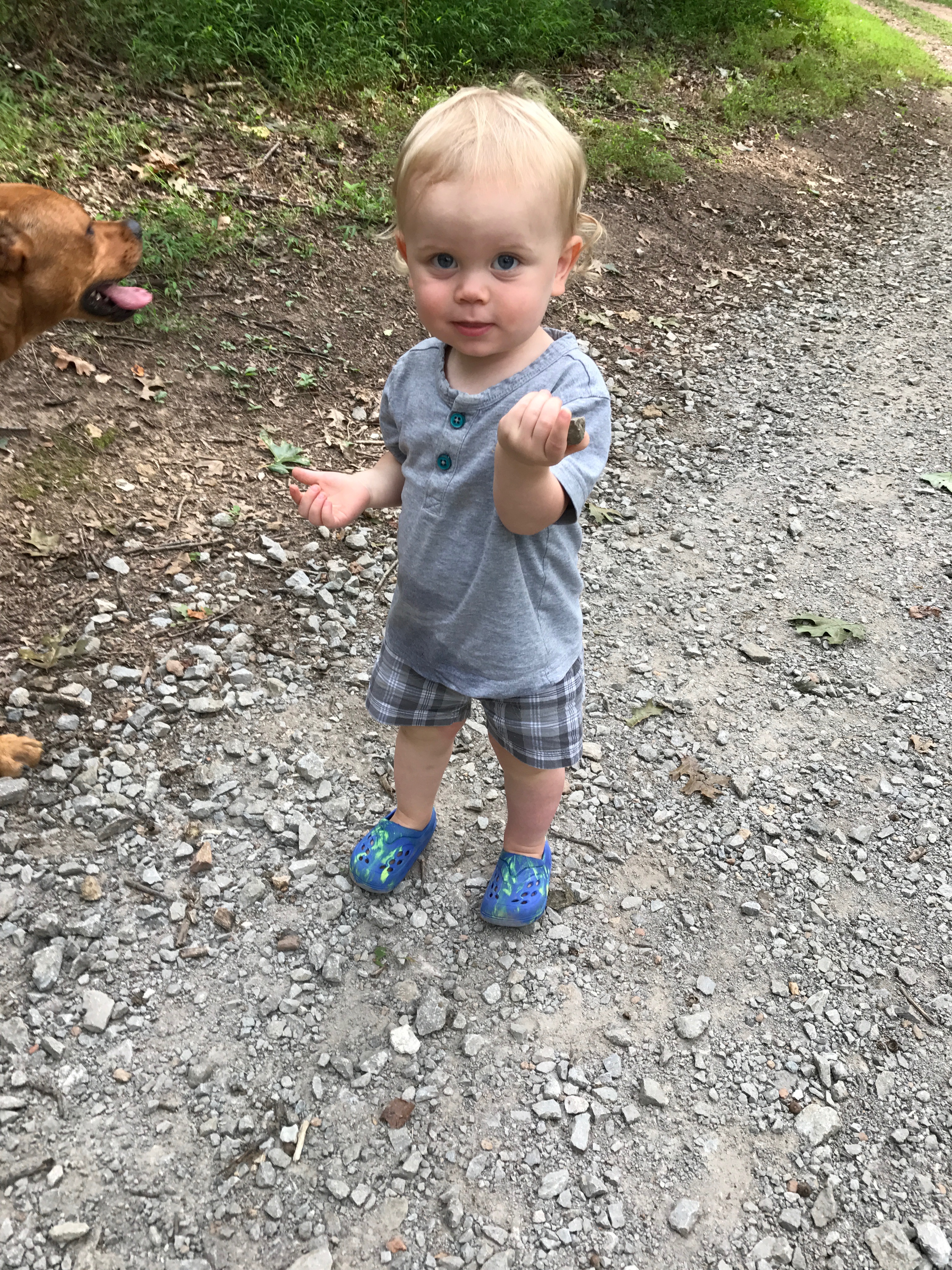 Actually he’s graduated past just movement and gone into independence. Which, honestly, is kind of hard for me or I guess just a different way of thinking. Until recently I’ve carried him everywhere and done everything for him. But as the song goes…everything changes (thanks Kathy Troccoli).

Now, he wants to walk the hiking trails on his own and find rocks…all the rocks. He’s so into rocks, sticks and leaves. It’s so neat to see his little interest peaked and for him to discover things for the first time. Plus it reminds me to stop and be thankful for the little things..like rocks.

His new discoveries have not stopped with nature. They’ve also peaked in the kitchen. Often in the form of dumping stuff onto the floor. I’m not gonna lie, this oatmeal was a beast to clean up, but at least he had some texture time. Heck, I did too. 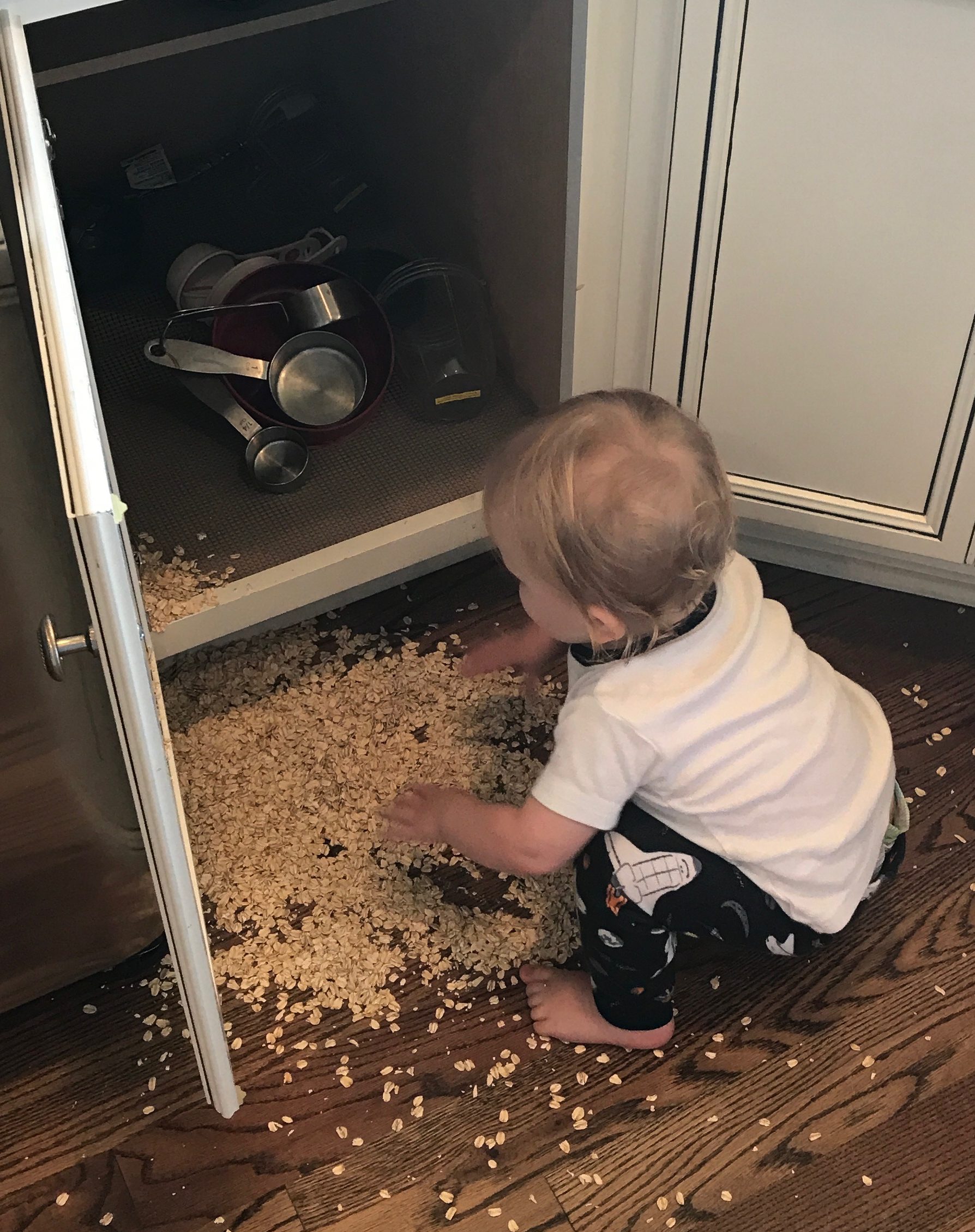 Foster is absolutely loving the opportunity and ability to check out everything he can open (I’ve left some safe cabinets non baby proofed so everything is not closed off to him). I like to think it aids his independence. He knows where to go to get his pouches, cereal and fruit. And you can call me a push over but I call him brilliant!! 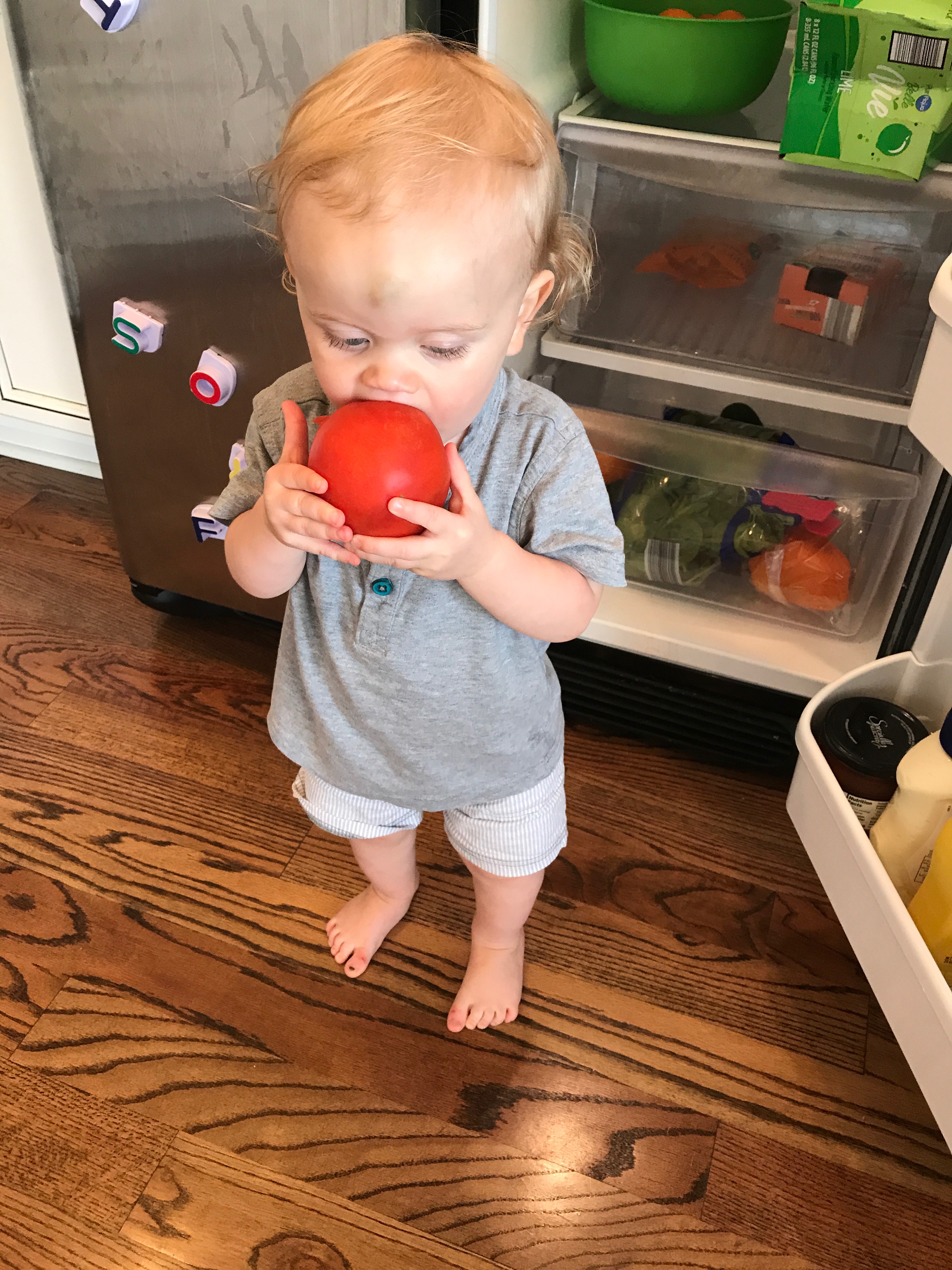 Even thought he thought this was an apple (it was a tomato). He had a rude awakening, but you live and learn…right?!

Oh and side note please take a look at his forehead. A bruise or goose egg has stayed there for the last couple months because every time he falls or runs into something he hits the same place. It is so frustrating and I hurt for him each time! I feel like I jinx myself because on the glorious day that it clears up I announce how excited I am and then it happens again!! Although, I don’t want to say it too loud, but I think we are exiting the falling “as much” stage. He’s gaining more confidence in his footing. Praise the Lord!! 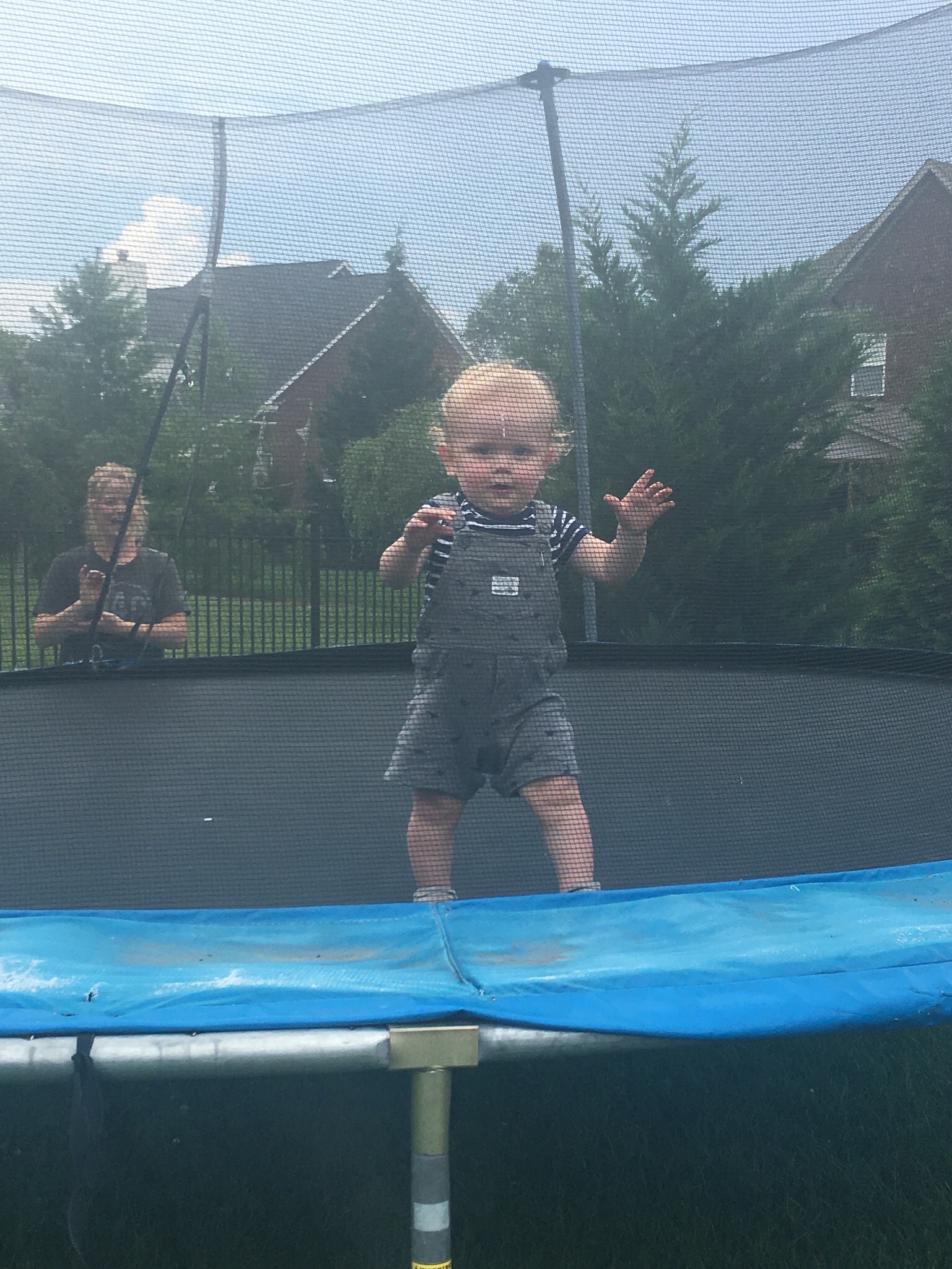 Speaking of footing, my mom just bought a new house with a trampoline and oh my goodness!! He loves jumping on that thing! He looks so proud as he skips, jumps and throws himself from side to side. Plus, he’s always down for a good applause congratulating him on his new skills. I mean, who isn’t?!

Okay, I know I have all sorts of mama pride but I just have to say that his smile has reached a whole new level. He just have such a sweet presence about him and is so happy to greet people, dogs, trucks, anyone anything really. He’s especially happy when he can put the peg in the hole at Cracker Barrel. While his mama is happy when she actually gets less than four left. 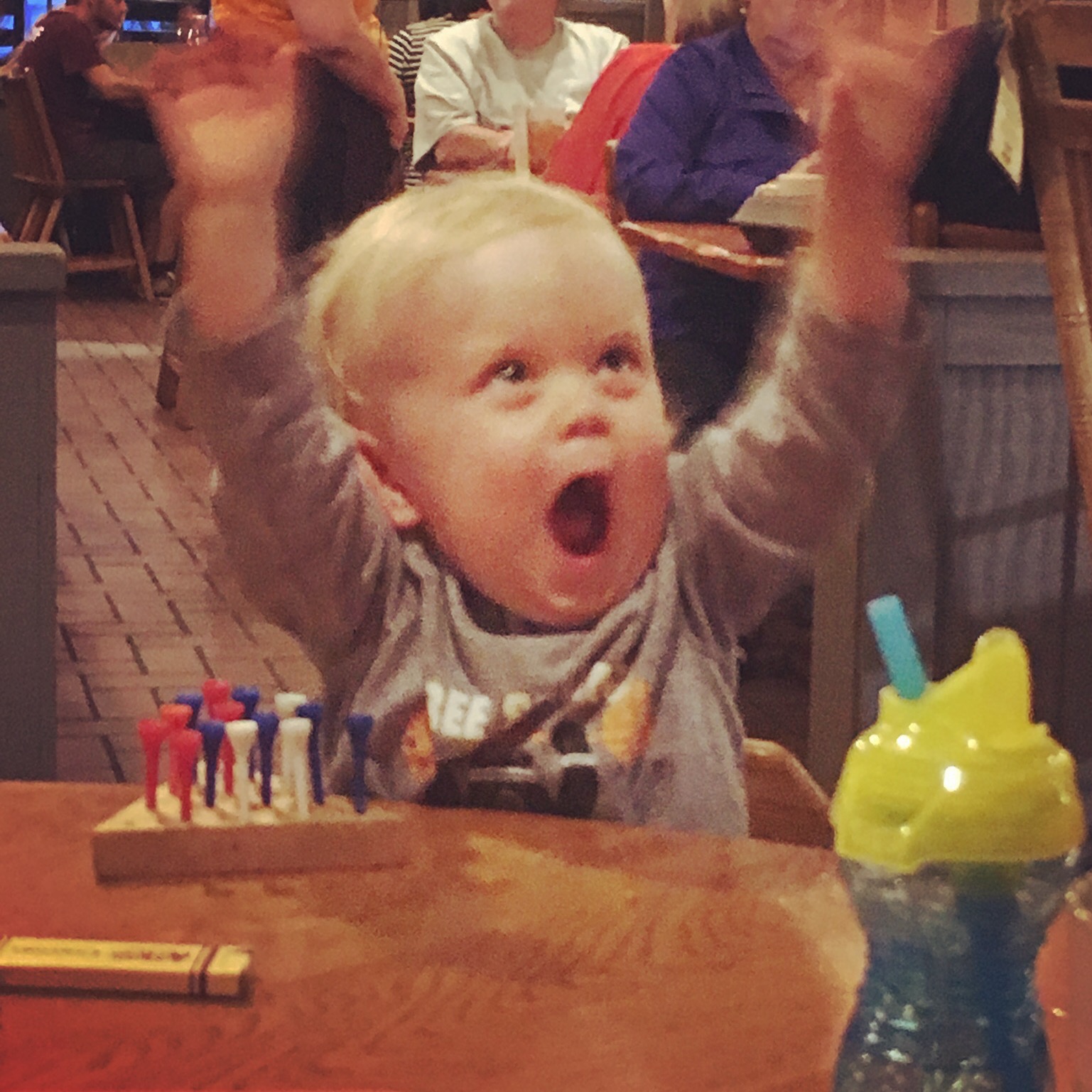 Being in nature is another things that he loves and always brings a sweet smile to his face. It’s a place where I can safely (most of the time) let him exert his independence. 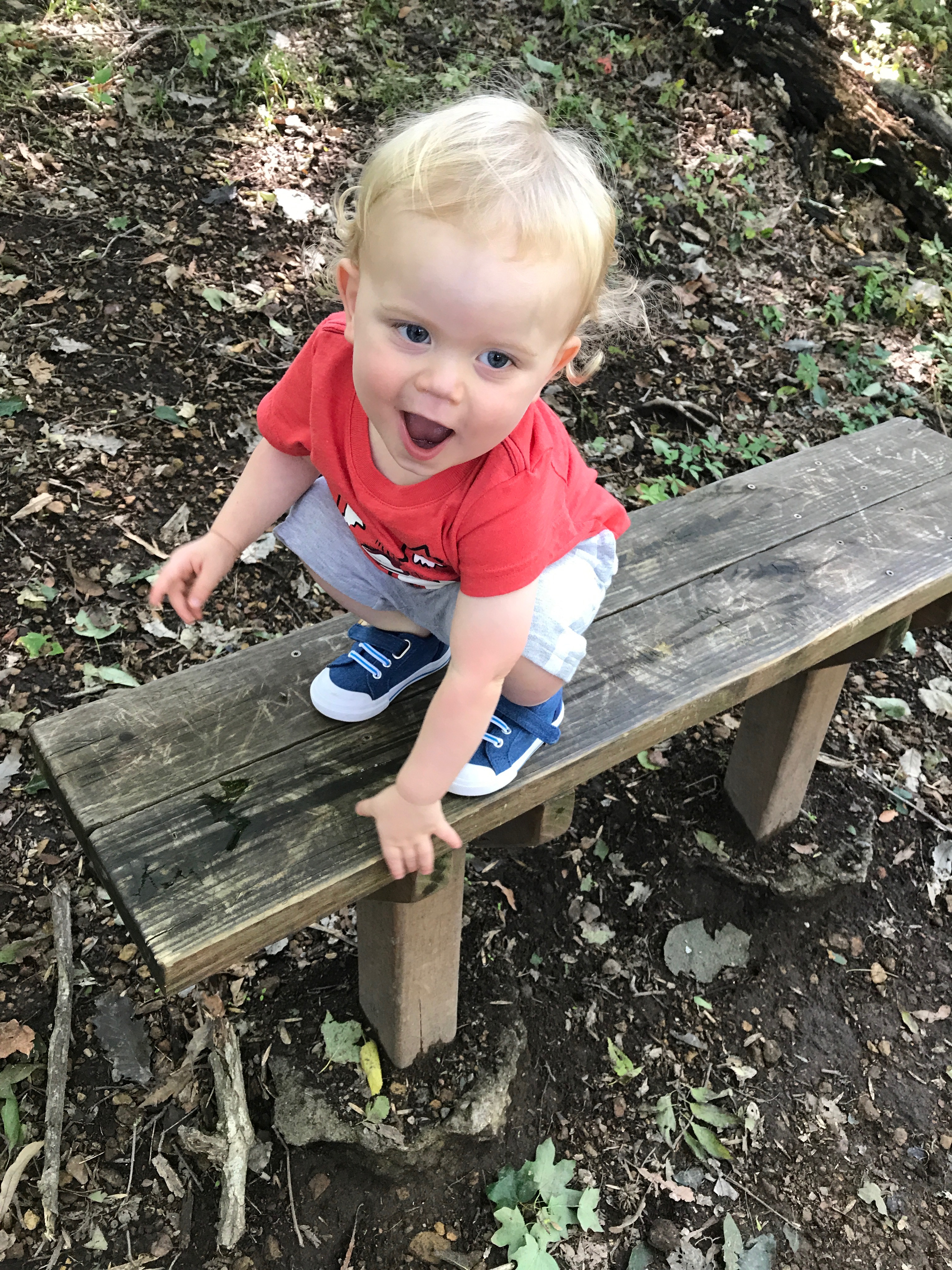 And of course, eating makes him smile. He’s gotten a little pickier these days about what he’ll eat. But, I can always count on fruit to be a winner! 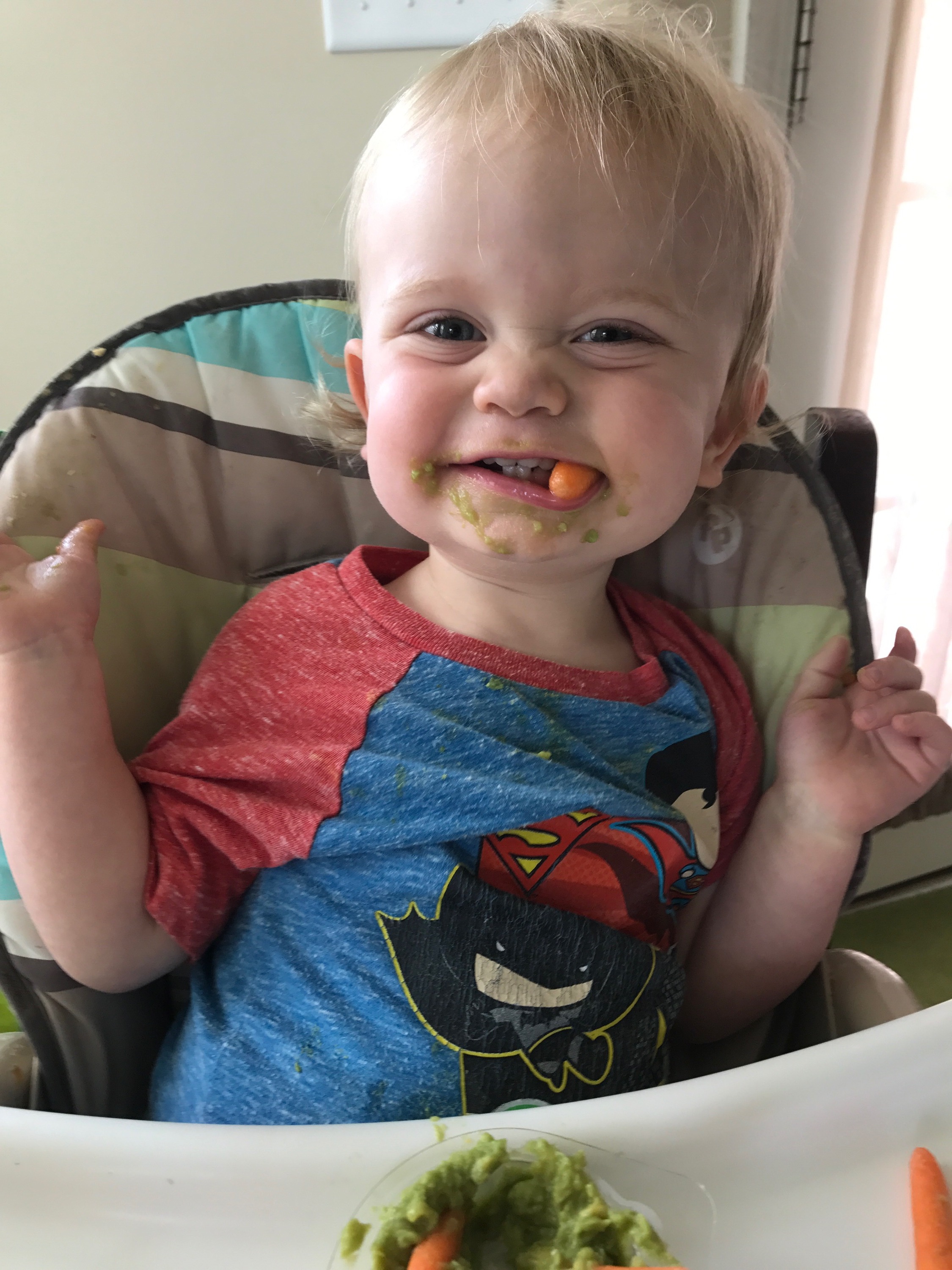 This was a super awesome day because he was eating guacamole, carrots and smiling!!!

Nursing: Don’t judge me but I still breastfeed him at 17 months old. Although, it is not nearly as often. It’s basically in the morning and a little at night. I’m just trying to let him take the lead on this one because honestly I’m not ready to stop either. That may sound weird. I thought I would be so ready to have my breasts back but it has become a bonding moment. I’ll spare you the pics for this one.

Solids: Like I briefly mentioned before, eating has become a little more hit or miss. There are days he’ll eat like it’s going out of style then days where he barely eats anything. 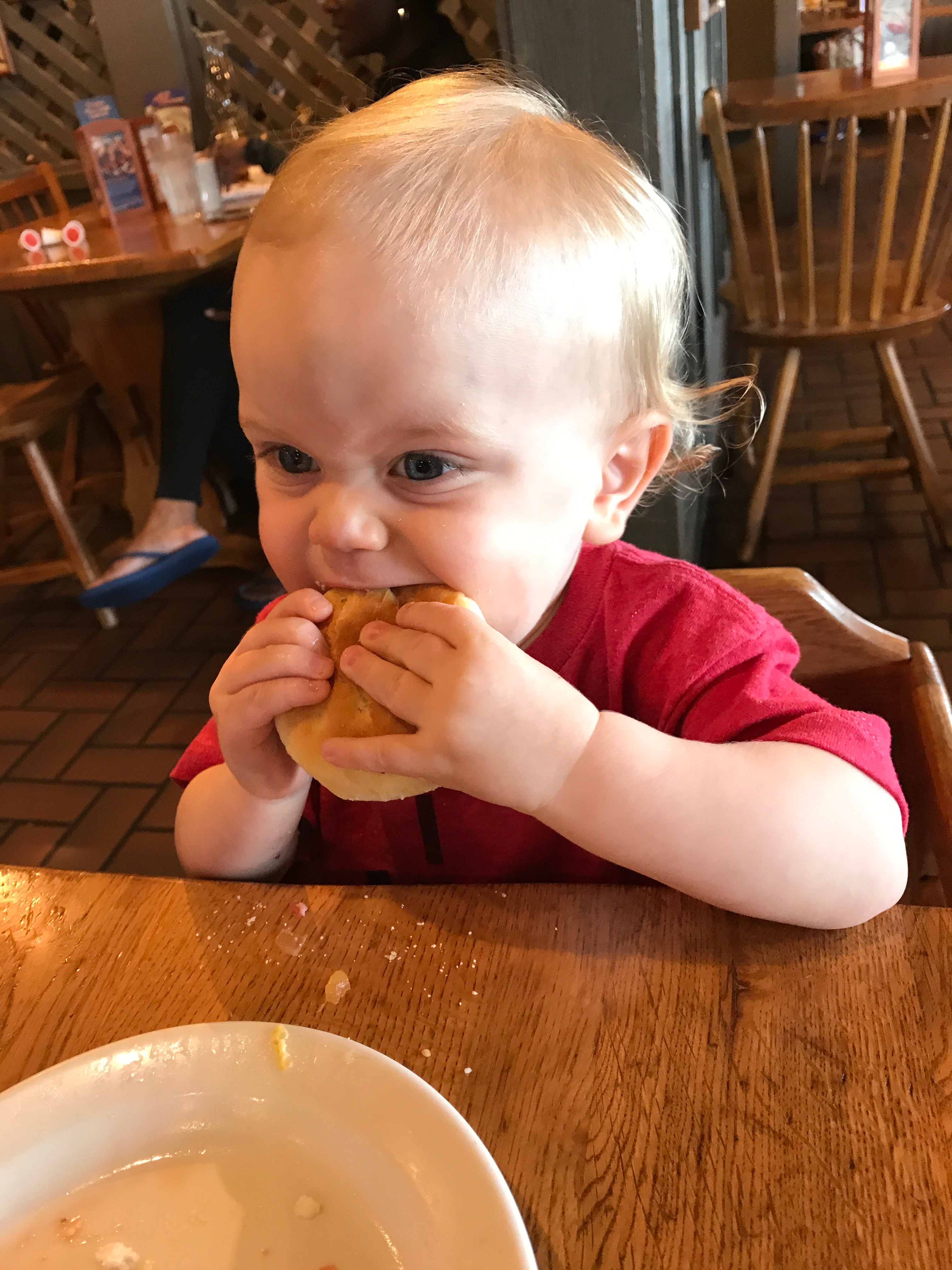 (p.s. it looks like Cracker Barrel is the only place we eat…I guess it kind of is…oops!)

The food he likes also seems to change day to day. Just when I made a big batch of pasta, he decides pasta is so 2016. There are many times when I try a ton of different food before I can get him to eat one. But, I’ve heard that’s fairly common at this age.

Communication: It is amazing how our toddlers can communicate clearly with us without using that many words.

Verbal: he can say hi, this, that, bye, yes, mommy and dad. I can’t wait until he can say I love you. I might literally become a puddle.

At the bottom I share some struggles that lack of communication has caused.

Sleep: Lovies and a paci are definitely an absolute must during bed time. He knows to go looking for them (again, brilliant!). We have continued our nighttime routine of bath, jammies, nursing and reading. Aaron, my husband, does most of the nighttime routine. Which is so nice because it gives me some time to finish whatever project I’ve started and left undone.

Naps: We’re in the process of moving from two naps to one. I wasn’t sure for a long time but his second nap was getting moved back so far that it was messing up bed time. So, I took that as a sign.

Now he usually naps around eleven but the length varies daily from 1-2 hours. I do a pretty similar routine for nap time as we do for bed time.

Personality: I know he’s my child, so I’m biased but his personality is amazing in every way. As you can see he is so excited about everything and everyone (meanwhile I look kind of terrified).

Warning: I’m about to share a ton of pics, so just bare with me. 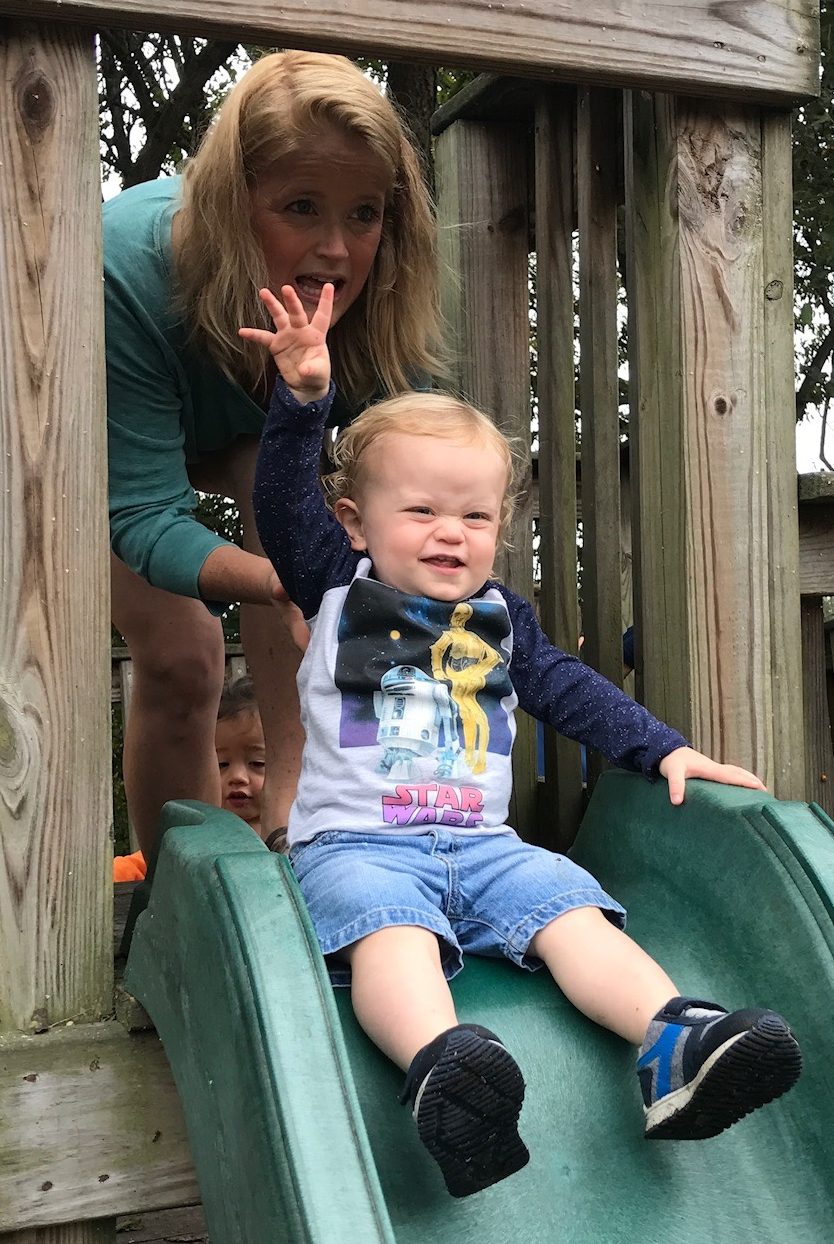 He loves to help and do thing by himself…Mr. Independent! 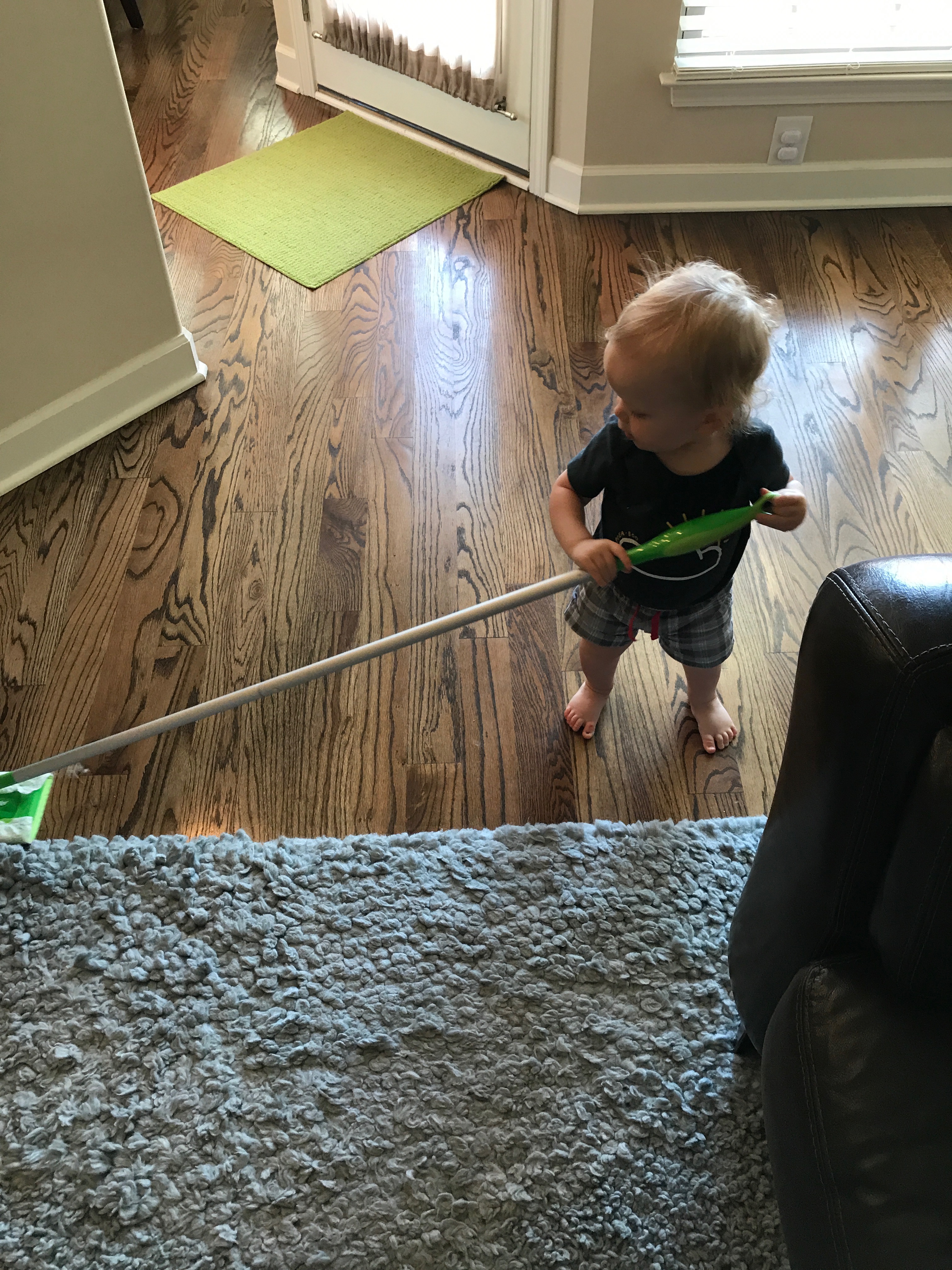 When anyone is mowing his world stands still. We finally bought his his own little mower and my heart literally almost burst from the cuteness! 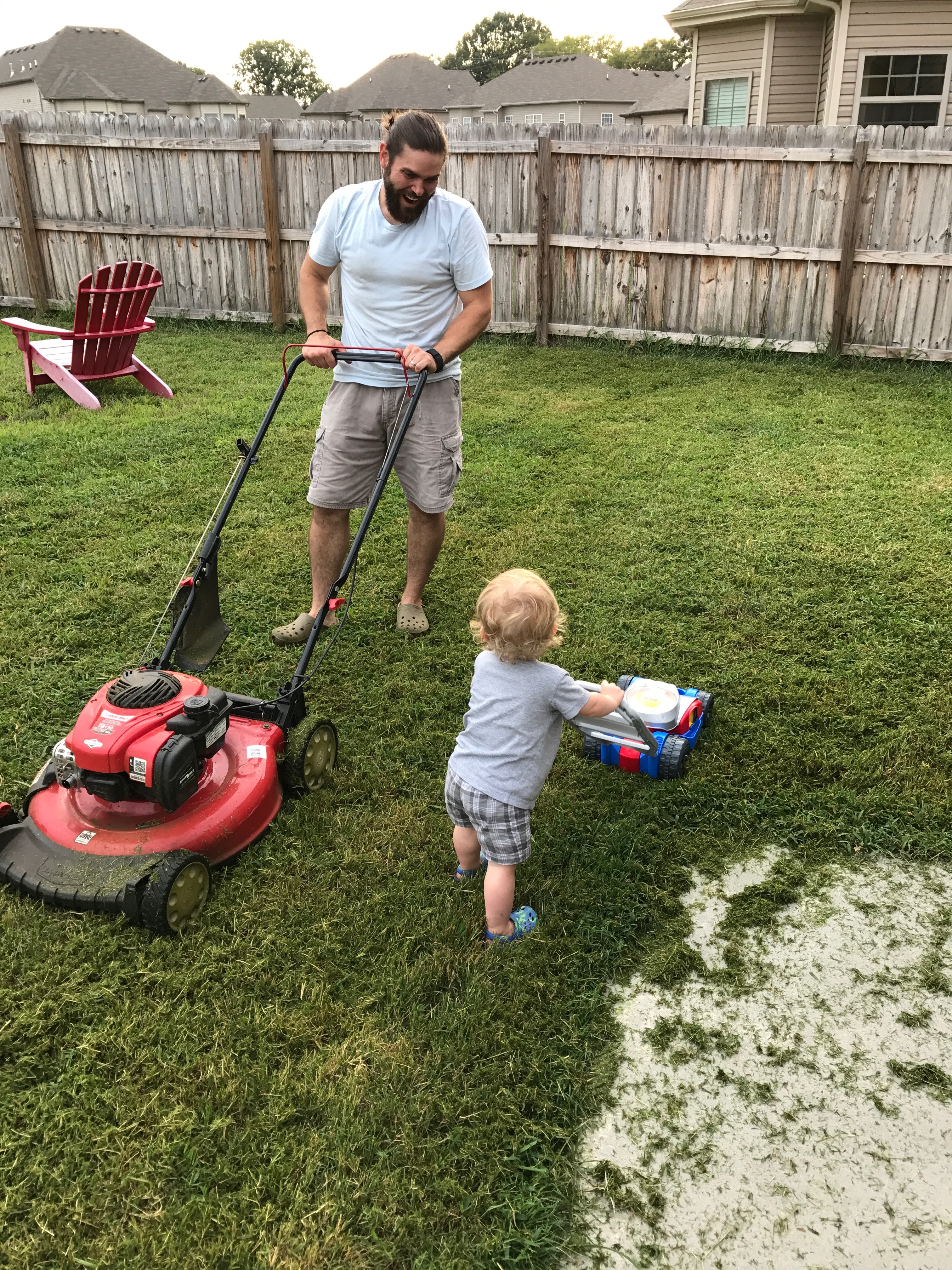 Foster is so observant and notices things that I often overlook. He reminds me daily to take in your surroundings and to be in the moment. He is one sharp little guy! 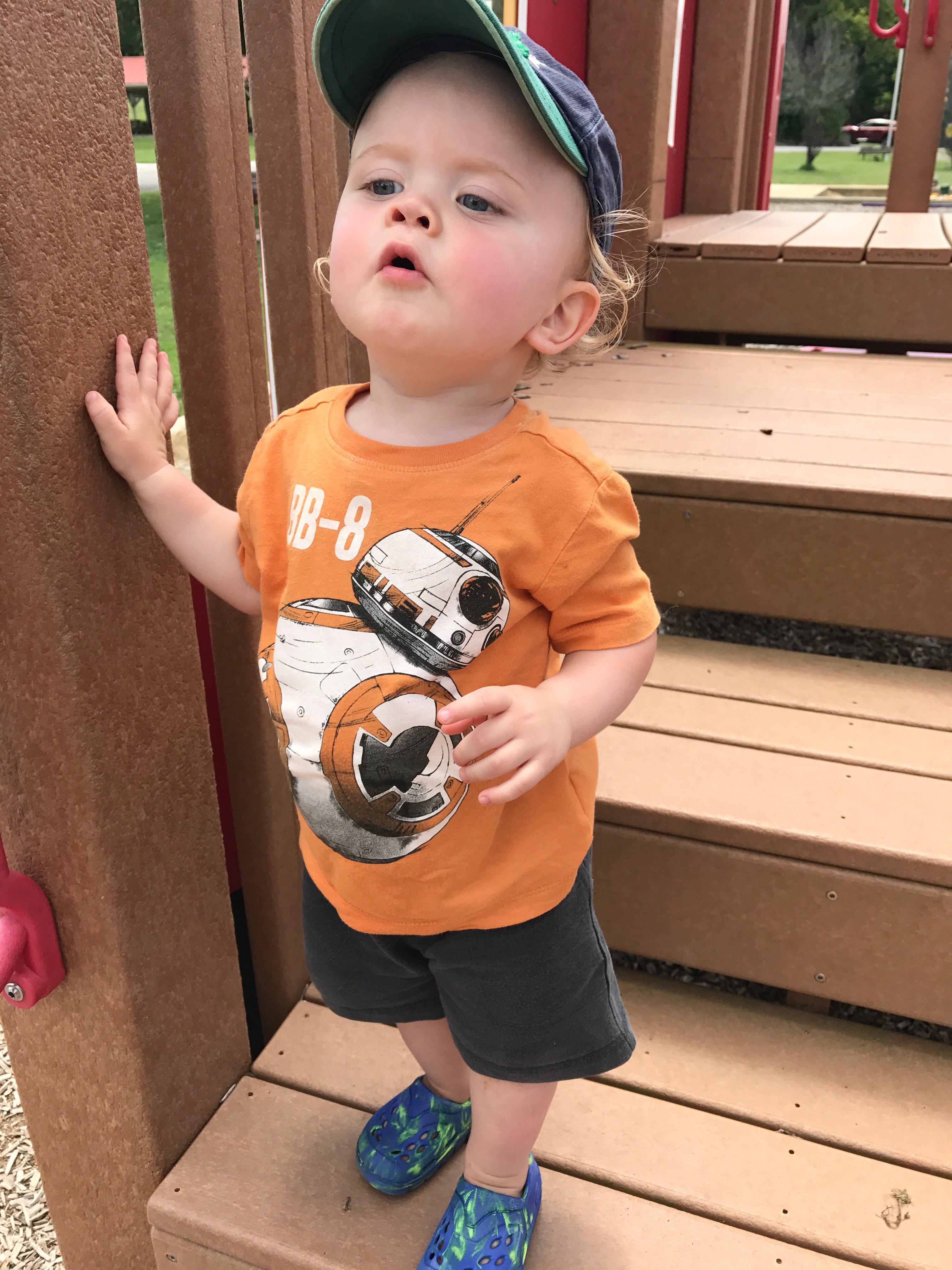 All things cars, trucks and balls are his absolute favorite and he will let me know quickly if he sees one of them. We often drive around looking for constructing just so he can watch the bulldozers. 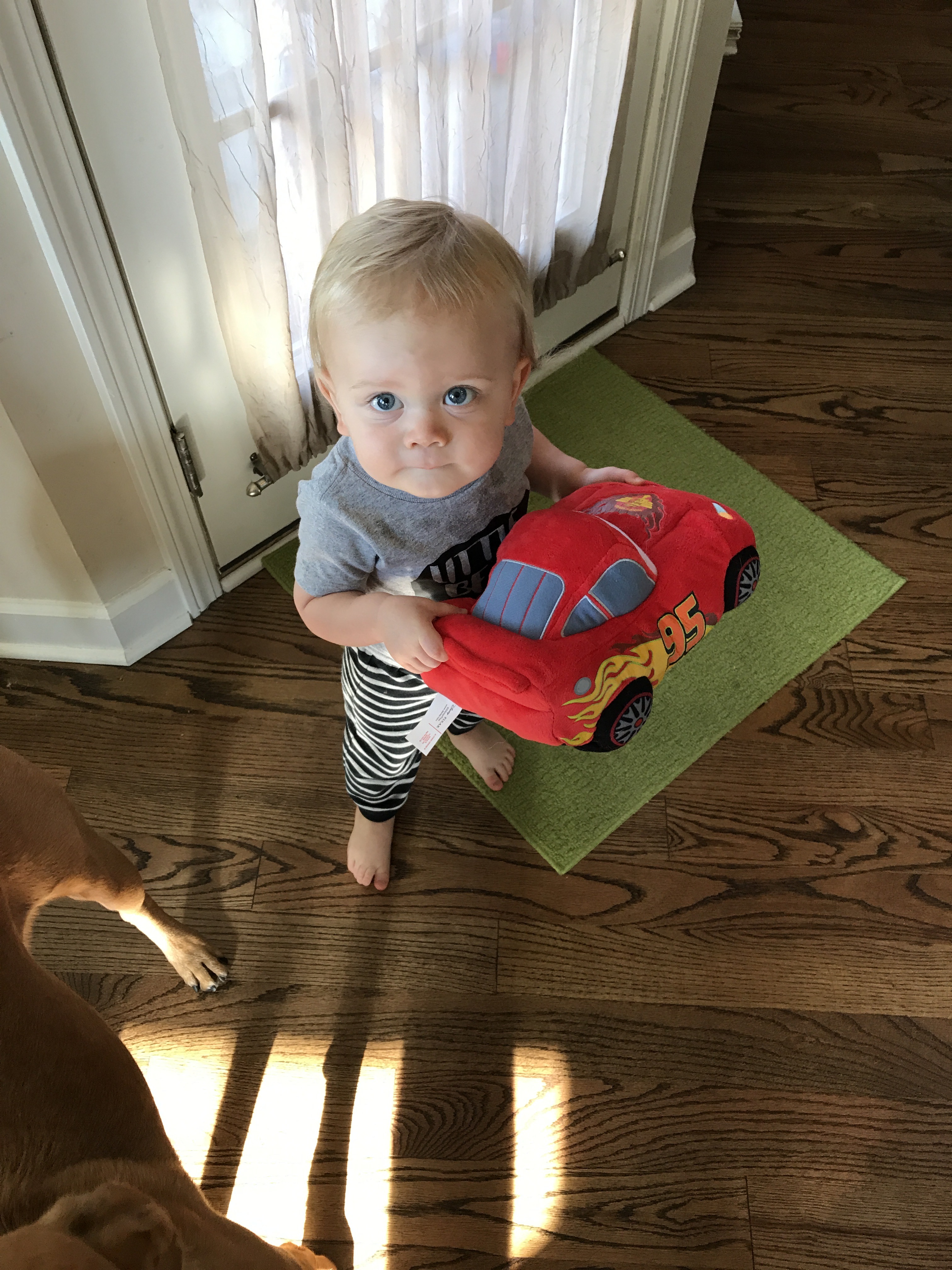 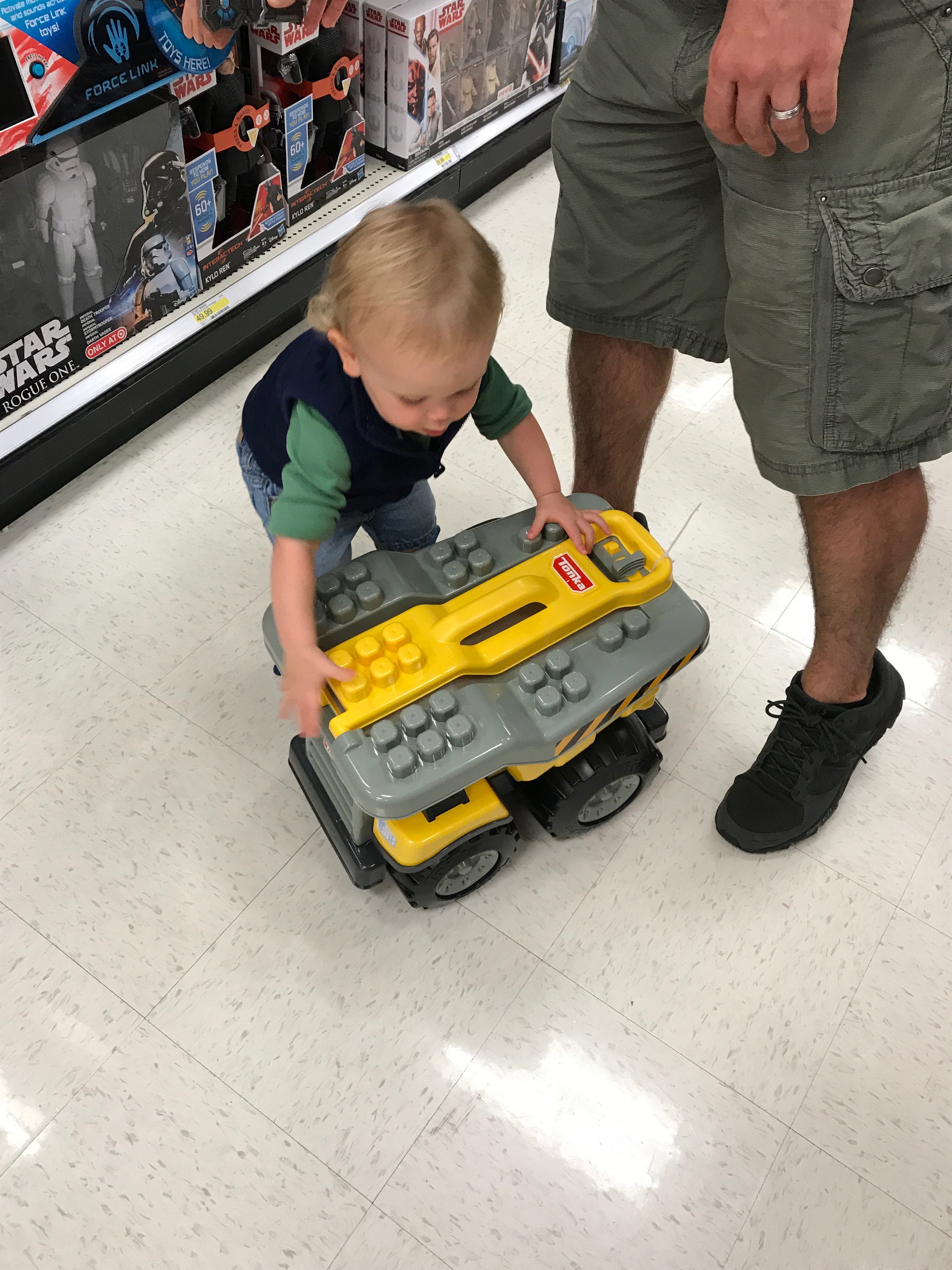 Swinging is his jam! He was never a huge fan before but a flip has switched and things have changed. He now can swing for a long time and be happy as a lark. I think it gives him more time to check everyone out. 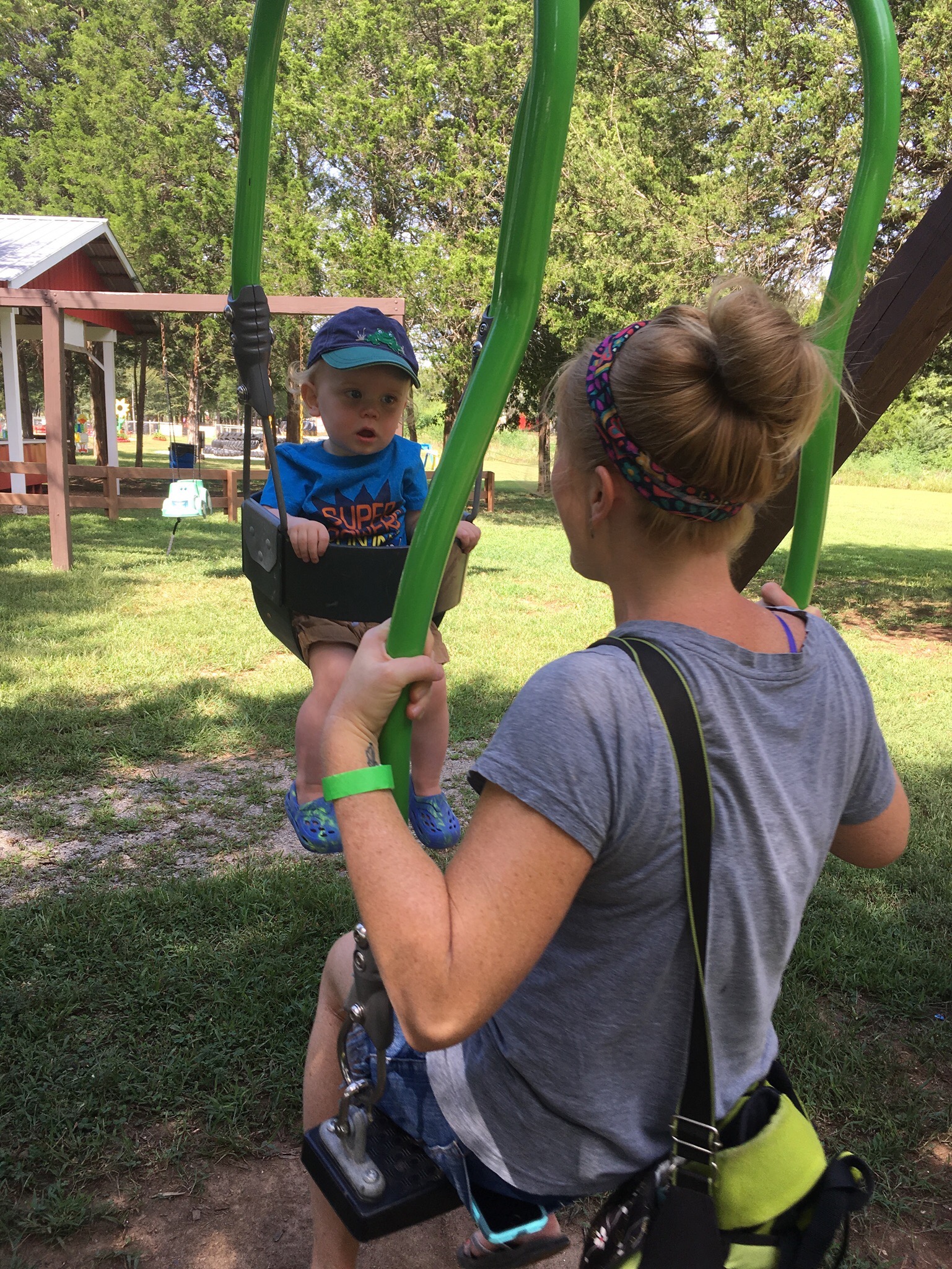 Reading is also a new found passion. He loves pulling them all out and going through the pages. Some of my chapter books are his favorite which I totally don’t get because there are no pics (but again, brilliant). 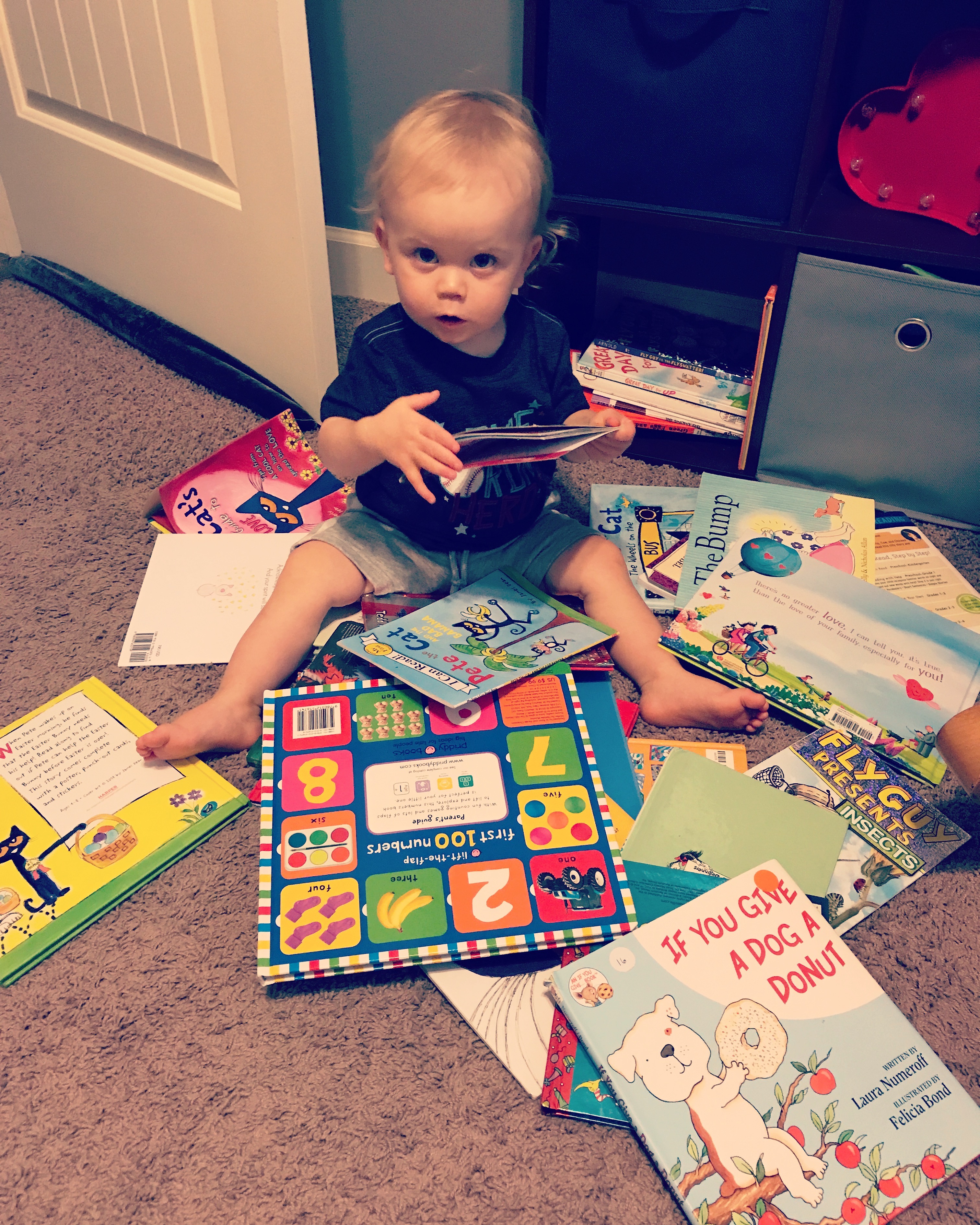 He also love, love, loves our dog, Hunley. When he was a newborn I was terrified that Hunley would hurt him and I was very nervous about their relationship. But it has turned into a beautiful friendship! Hunley loves him too…most of the time. 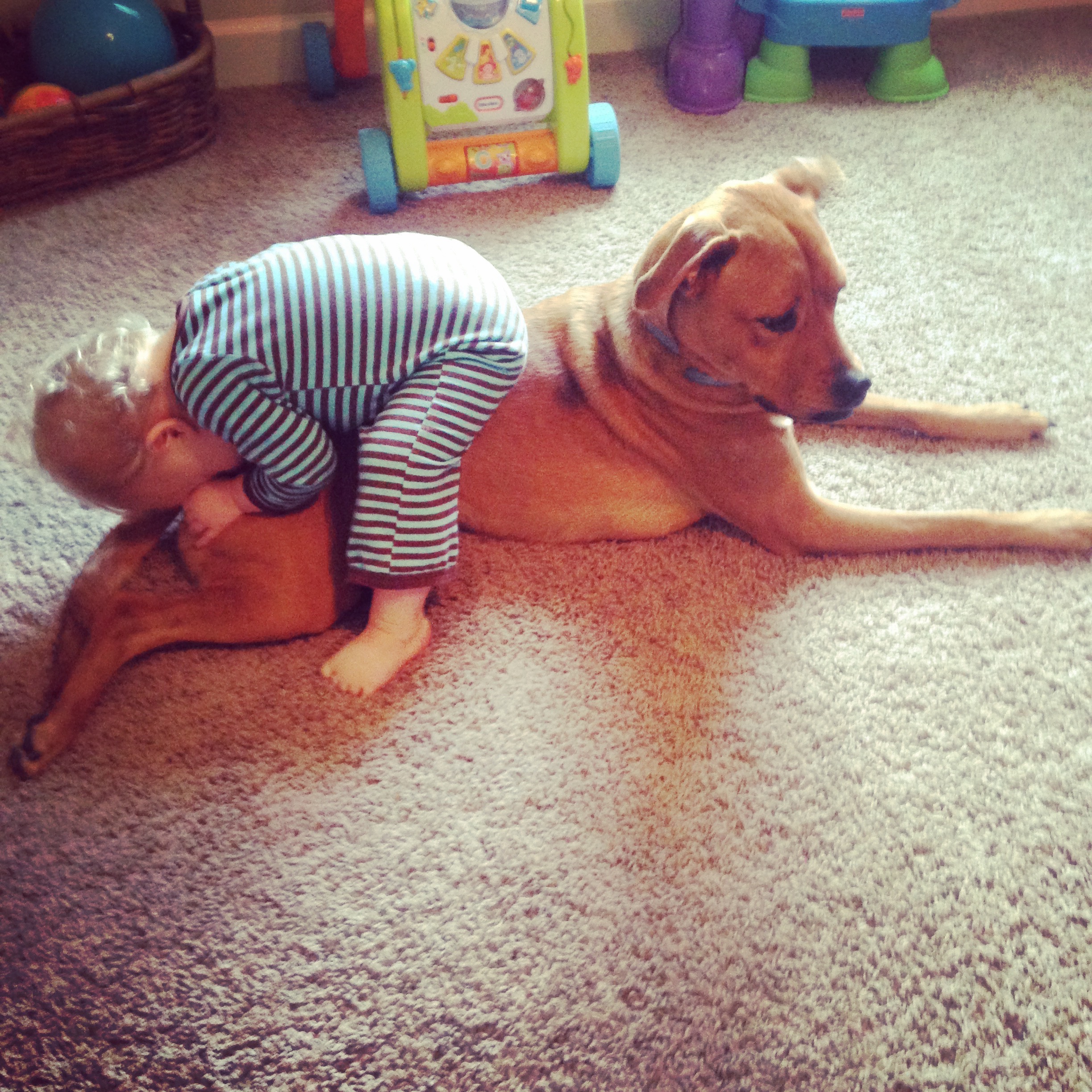 Praise the good Lord above! We finally traded in my Toyota Yaris (2 door) for a Honda CRV and life looks a little brighter! He is so much happier in the back seat and doesn’t start crying as soon as I put him in the car, so I consider that a big fat win!! 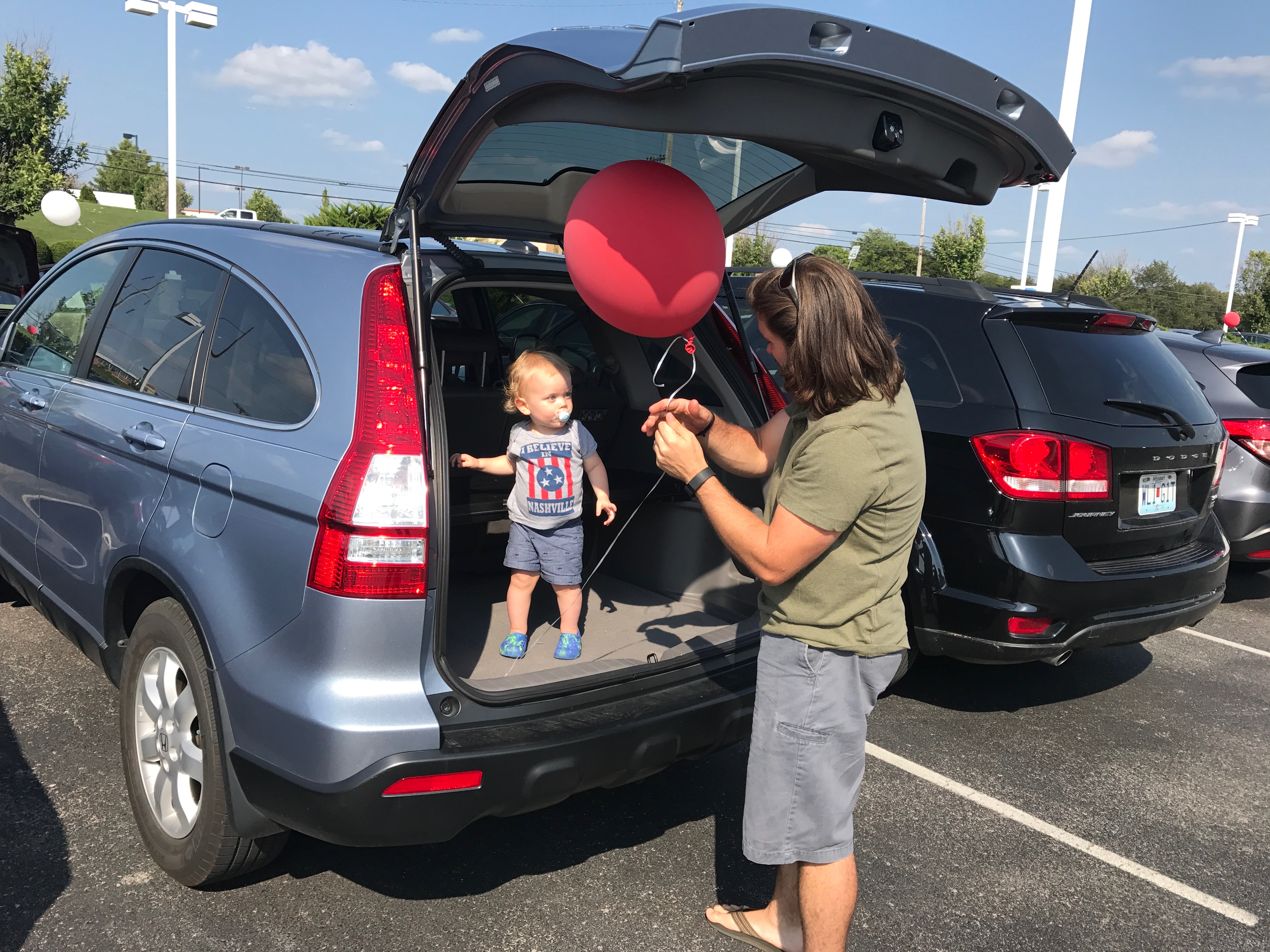 Struggles: I want be as transparent as possible so I thought it only appropriate to add a “struggles” section. So, some of the ones we’ve been working on: hitting, bitting, screaming.

As a former teacher and professional Googler, I know that all these are attempts at communicating.

But, I want to give him other ways to communicate and nip the not so fun ones in the bud. So, here’s what we’re trying out.

If he’s hitting or biting we say no and then go on to talk about how it hurst and it’s not nice. If he continues he goes to timeout for one minute. Then when I get him out we talk about why timeout happened. So far that has really helped because he really doesn’t like timeout.

For the screaming, I’ve been trying to give him more opportunity to be independent. If we need to go somewhere I don’t immediately pick him up. Instead I tell him where we are going and what I need him to do. This has helped a lot too. I think just knowing what to expect is good for him.

So, this was super duper long and if you’re still reading it..BLESS YOU!! I just had so much to say after no updates for a couple of months.

One Year Old Birthday- You are My Sunshine!