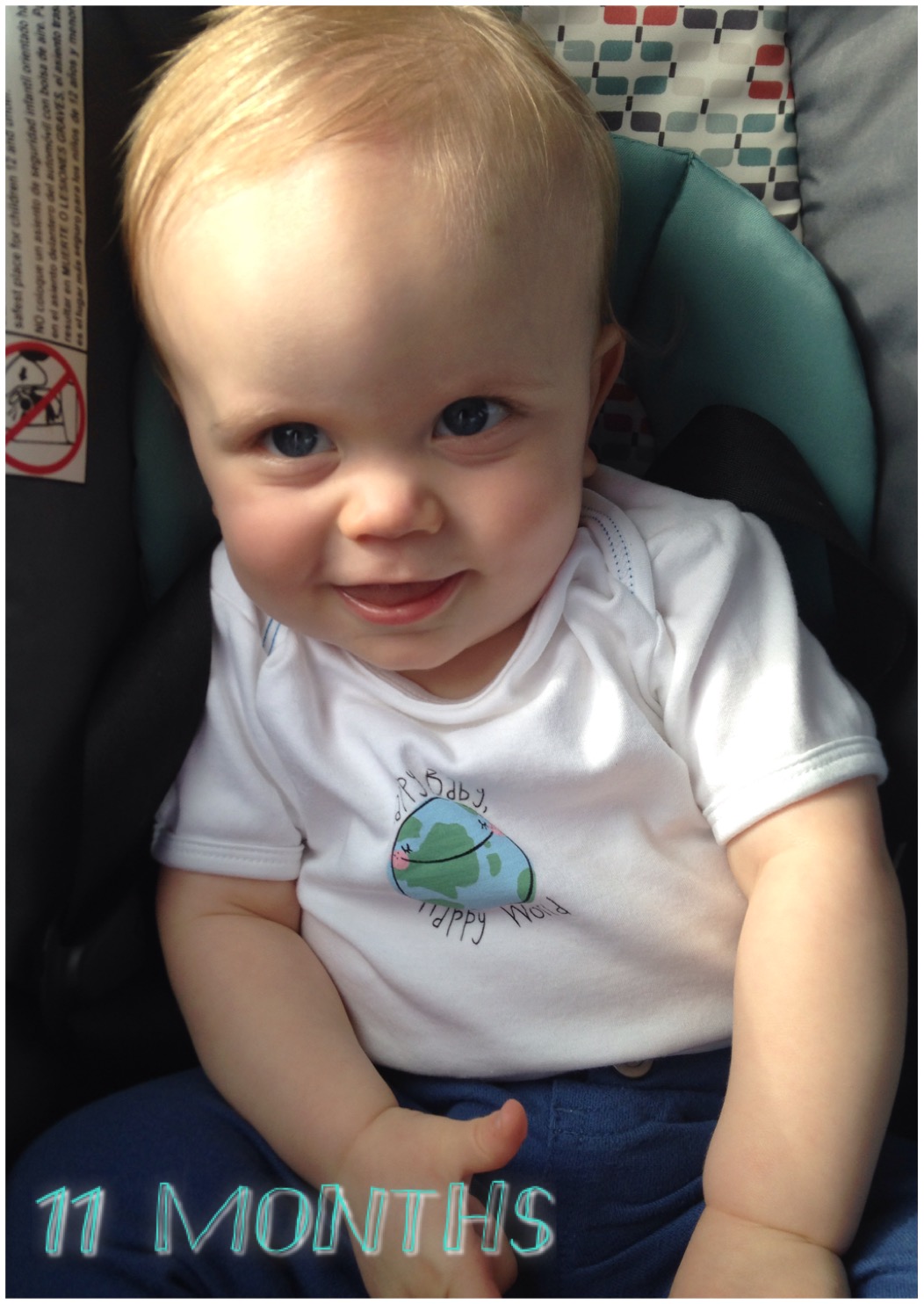 As soon as Foster turned 11 Months Old I feel like his physical appearance changed. Almost over night he went from my little baby to my little toddler, just like that. I went in to get him one morning and he just looked so much older. Maybe it’s just in my head because I know he’s about to turn one or maybe it’s legit. Either way, it feels pretty real to me!

I have heard moms say that they are so sad when the “baby” stage is over, but I refuse to believe that it’s over (it still isn’t over..there’s a Notebook reference for ya). Maybe I sound cliche but I feel like he’ll always be my baby!

Movement: Our little adventurer continues to explore and this month he has become even more curious and brave! That can be a dangerous combination.

I have really had to be on my toes to make sure that he doesn’t shut his finger in a drawer or door (two big fascinations). It’s hard to find the balance between letting he explore or saying “no” to try and protect him from his own exploration.

Sadly, he has shut his finger in the drawer or hit his head while I was trying to save his fingers. The poor kid seems to keep a bruise on his forehead. I guess it is the biggest thing on him so it makes since that he would hit it most often…runs in the family (thanks Dad). 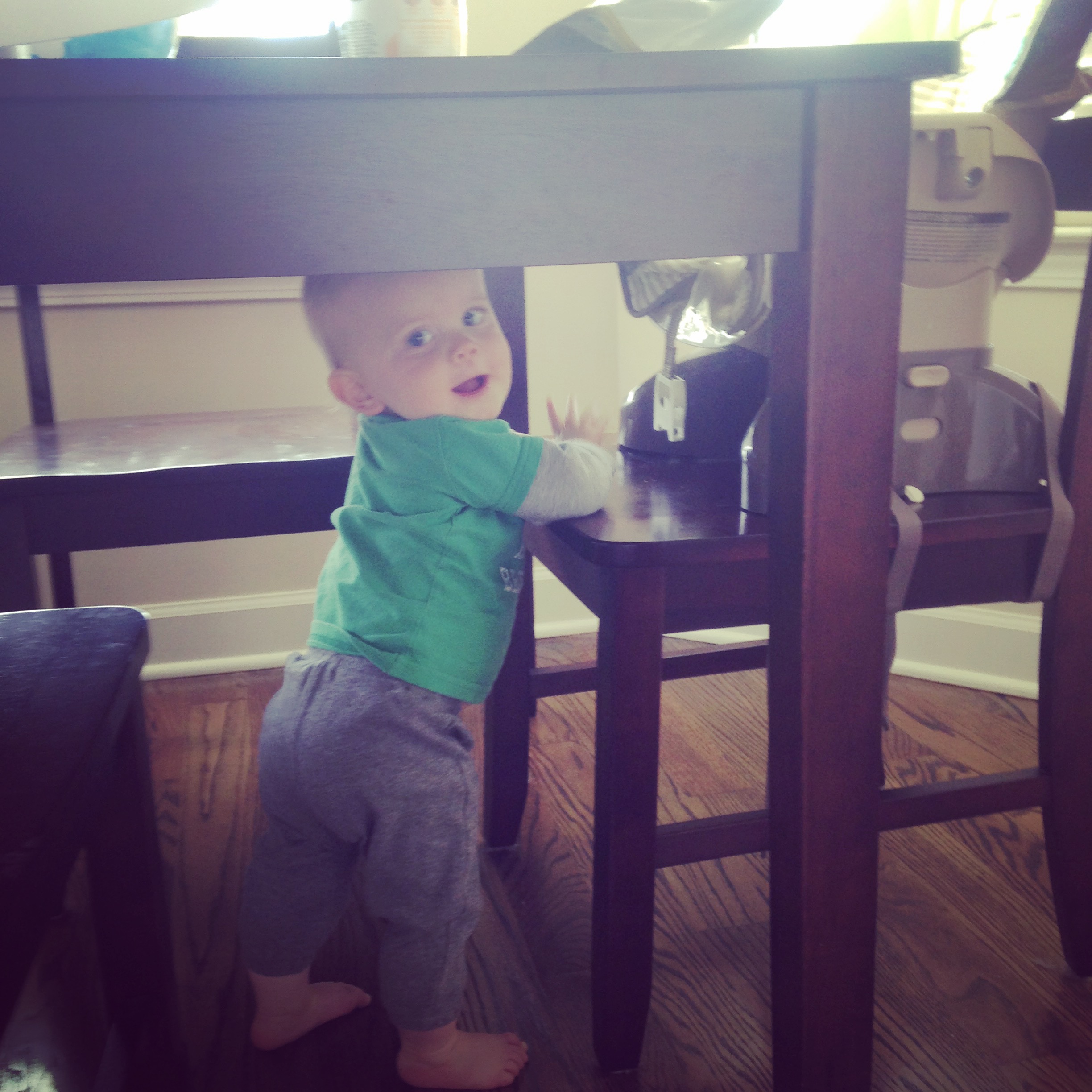 These days he rarely want so be held. He would much rather be crawling, yup the real kind. He has moved passed the army crawl and is now on all fours zooming about. He also loves to walk places with the assistance of his parents, furniture, toys. Really whatever is closest will due. 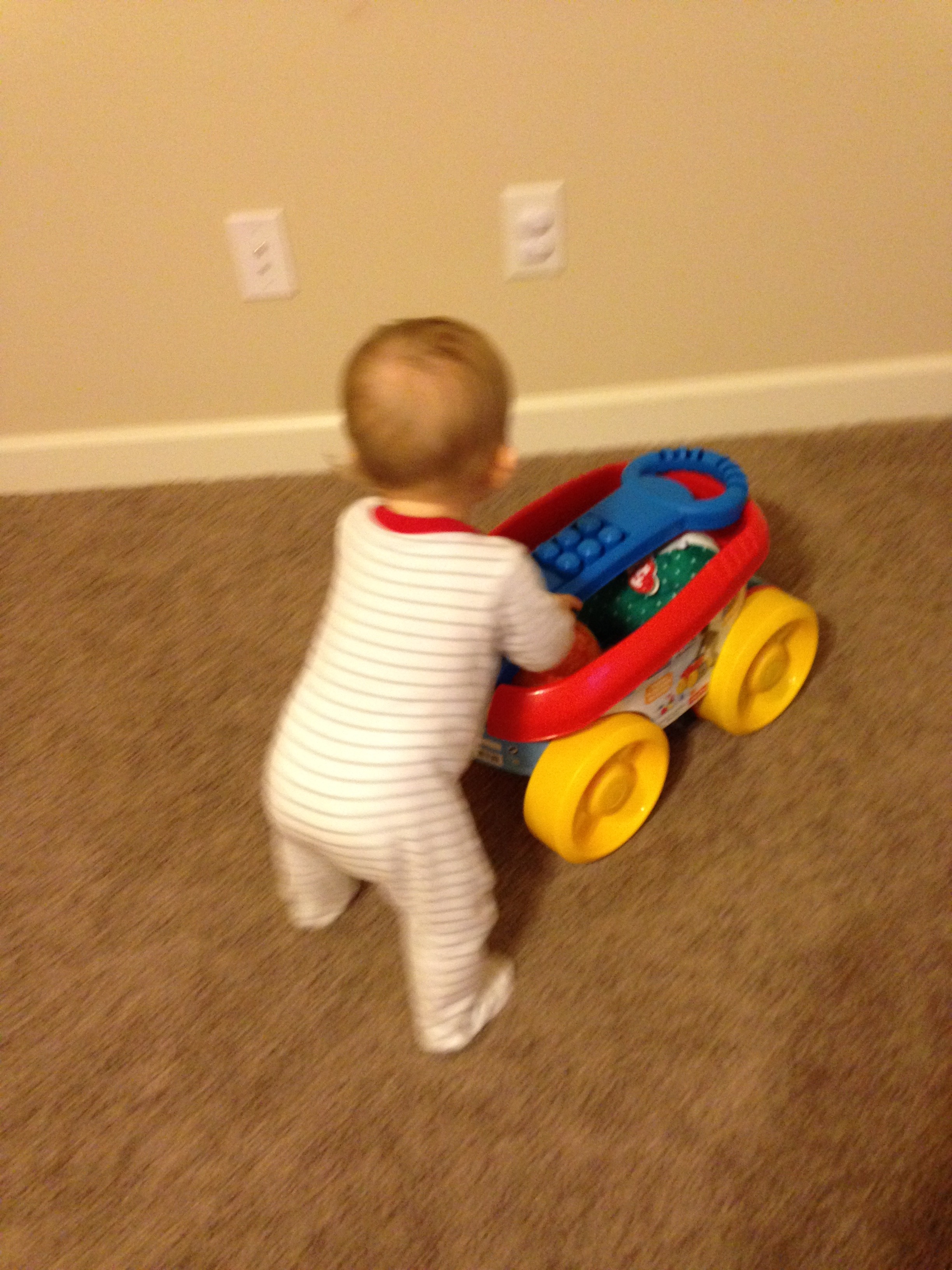 He can definitely get frustrated when he’s not able to move about the way he wants. I can tell that he so badly wants to be able to walk without any help. I really think it could happen any day now! He has already stood up on his own for what felt like a minute but Aaron told me it was just a couple of seconds, but I’m holding strong to my minute.

I’m equally as nervous and excited for him to start walking, but I know he will be thrilled when he gets the whole walking thing down!

Foster continues to be my little sunshine everyday! Smiling is how he greets everyone and everything; family, strangers, dogs, toys, trees. You name it and he’ll flash his little smile at it. I know I’m his mom and all and I’m probably a little biased but I don’t even care. He has the most beautiful smile I’ve ever seen! I am so thankful and blessed that he is my son! Smile on little man! 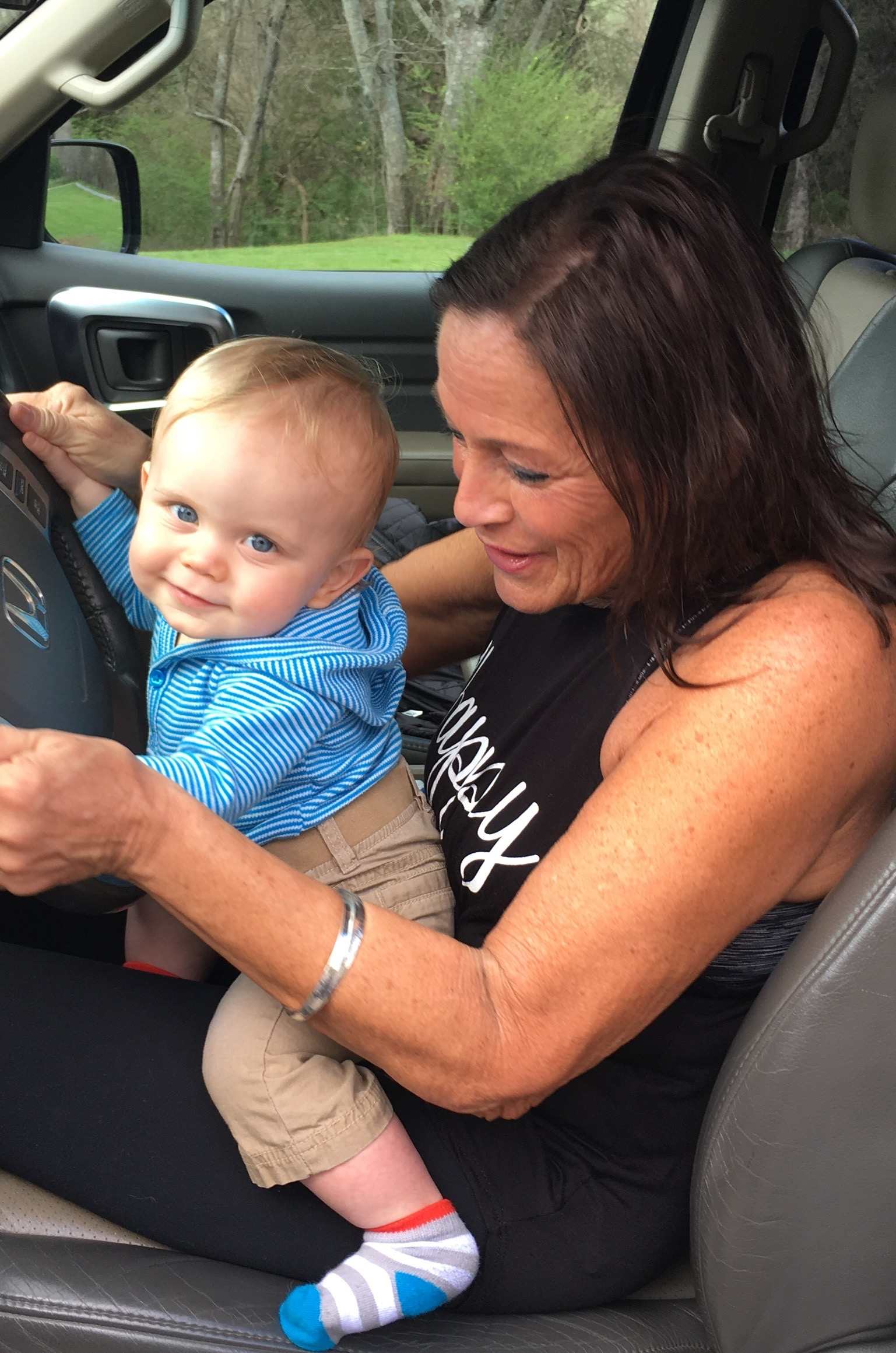 Nursing: I don’t feel like my right breast has bounced back since having Mastitis. He resists nursing from that side every time and becomes quickly frustrated with it when he finally gives in. I know there is less milk being produced because my breast just feels emptier. That means that it’s all up to ole’ lefty. And that means that I am lopsided, but oh well, it’ll all even out eventually I’m sure. Right?!

Morning and night feedings are definitely the best. During the day he is not interested at all. I still try to nurse every three to four hours but it doesn’t always work out.

I’m not sure when I want to start weening. I think he may do it naturally, although, I would like to at least still nurse at night time. It’s just such a sweet time together. Moments of cradling him are very few and far between these days, so I want to embrace it when it does happen.

Solids: I am so proud, happy, and excited to announce that Foster has almost gained two pounds since they labeled him “failure to thrive.” He’s living up to what his grandpa preached, “I am not defined by my labels, libels, or limitations.” Yea God!! 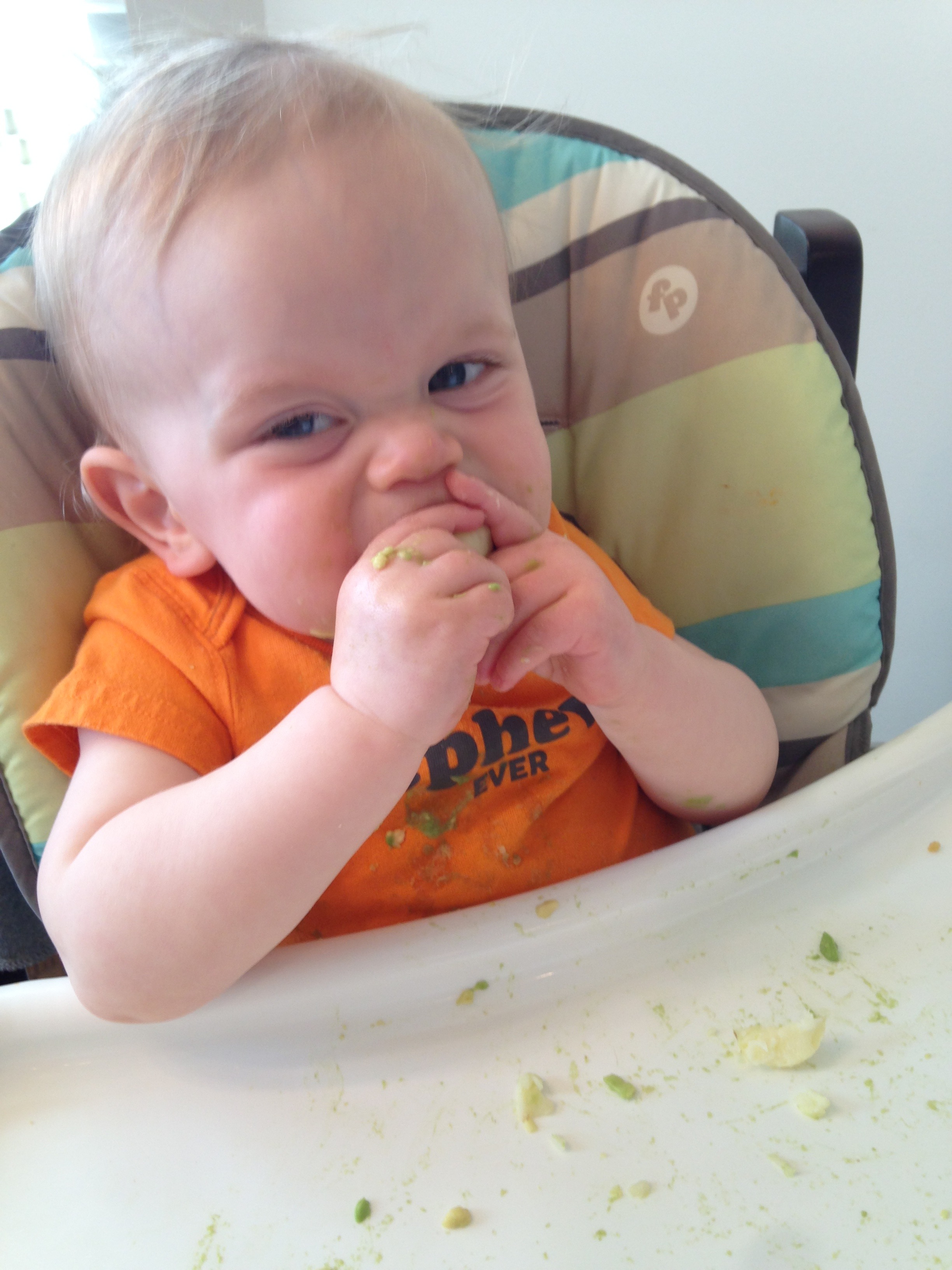 With that being said, he is now eating three meals a day with a snack or two thrown in there most days. I try to follow his lead and offer and then when he shows signs of being done, we are done. I don’t want to force anything on him.

His favorite foods right now are eggs, blueberries and pretty much any kind of pouch, which are great when we are on the go. 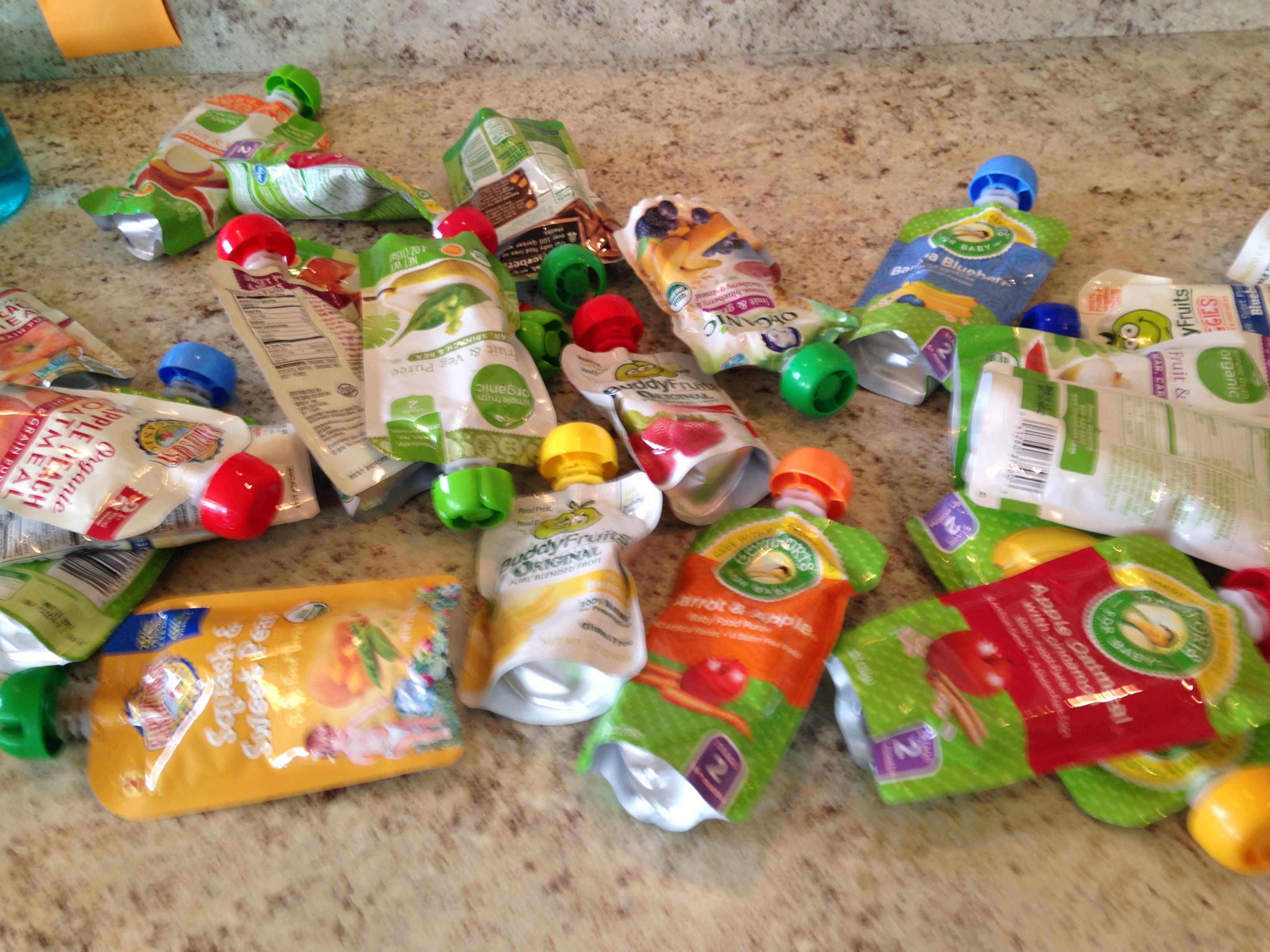 Sleep: Now that we are over all the sickness sleep has pretty much resumed back to normal. He still wakes about once a night and gives out a pretty good cry (that scares the crap out of me every time) but most nights he just goes back to sleep. When I see that he’s standing in his crib I know that it’s all over. That’s when I go in and nurse him back to sleep. Yup, I said it…I nurse him to sleep. I know that’s a big no, no, but hey, it works for us.

Naps: Naps went all kind of cray, cray this month. What used be a pretty simple process became pretty painful. I would do our normal routine…read, pray, sing and put him in the crib. Then he would say, “no you didn’t” and snap his fingers and scream until I’d come back in (maybe he didn’t literally say that but he might as well have.) Also, he would only go down for one nap. So, the nap thing was all out of whack this month.

But, I think  found a solution. I’m now spreading naps out about three to four hours instead of two to three. I also read with him in the living room before taking him to his room. I think that helps calm him down a bit before we get to the “nap space.” Then when we go to his room I nurse him to sleep. Yup, there’s that no, no again. But, it works for us and he gets a good nap, so that is that.

Personality: I love, love, love watching his little personality develop. Above all else I would say that he is just a happy baby. I mean don’t get me wrong he has him moments of being “over it”, but all in all he is happy.

He absolutely loves people and watching them. Everywhere we go his attention is captivated by all the people around him. 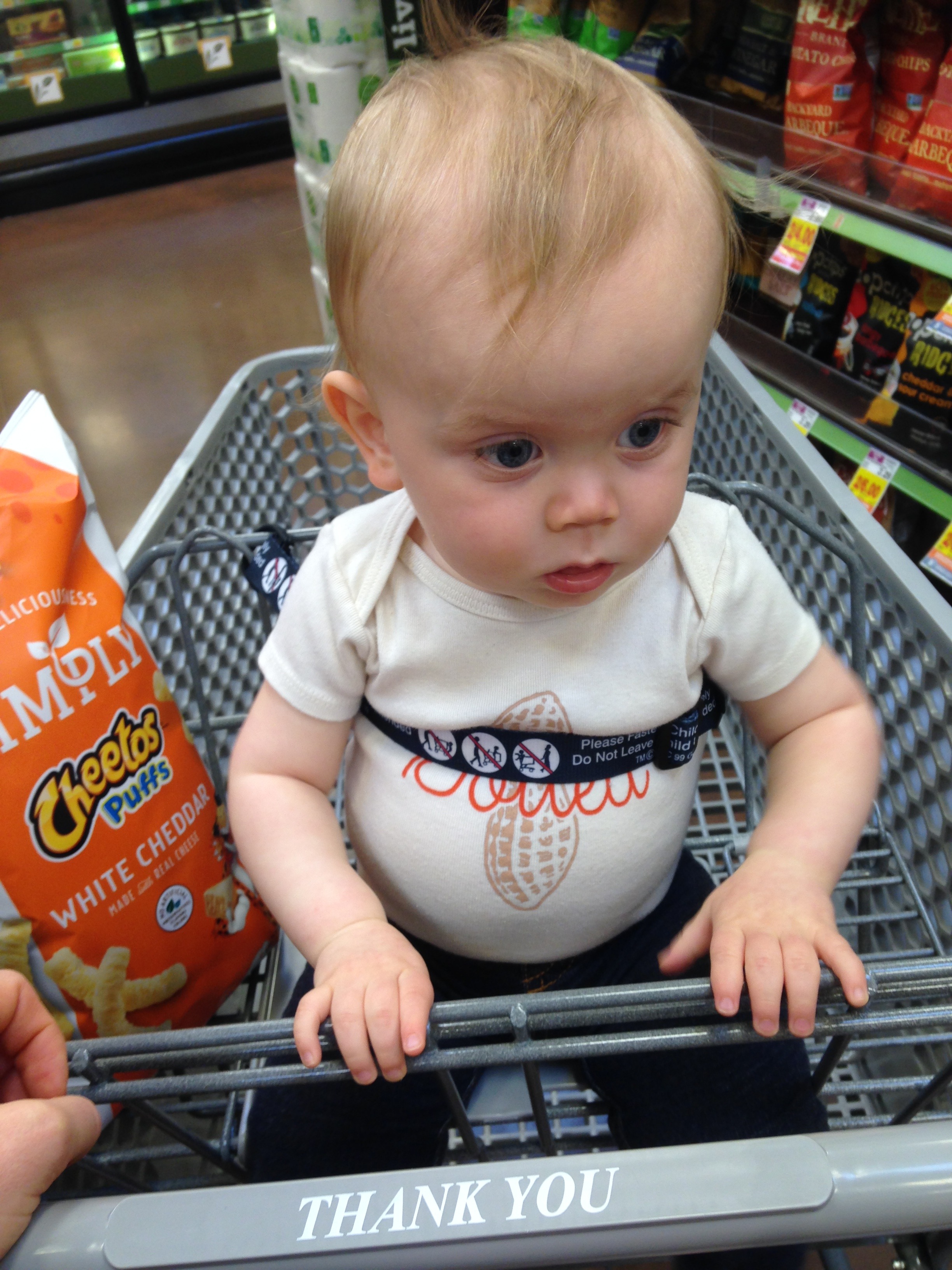 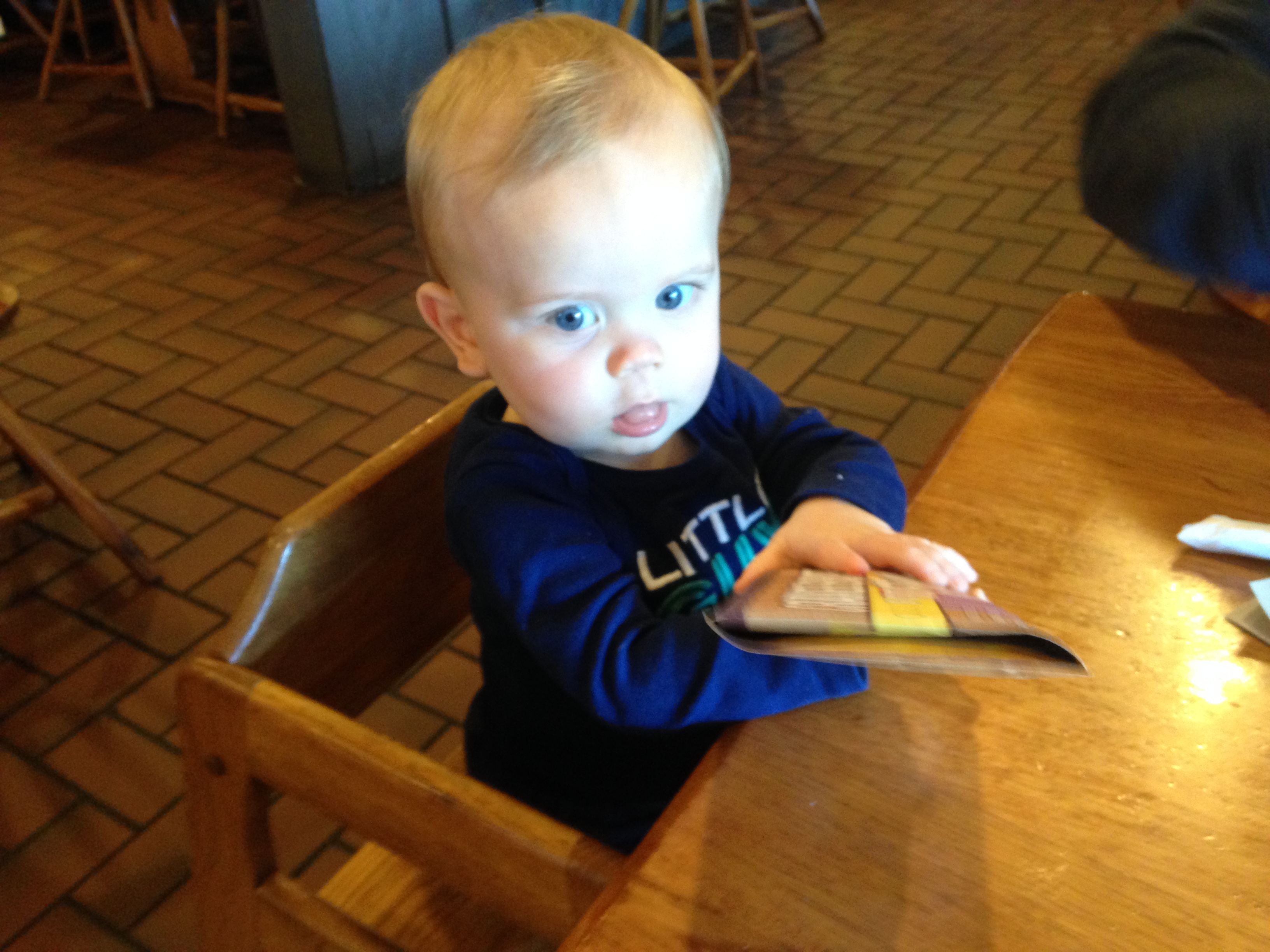 Then when he finally gets there attention his little face will just light up with the biggest smile and he’ll start waving. Most of the time they wave back. Can you believe some people aren’t excited to see a baby??

He is also so loving! We went to visit my grandpa again and it was such a cool experience for him to see his great grandpa! Even though grandpa could not interact with him a ton Foster was so intrigued by him. 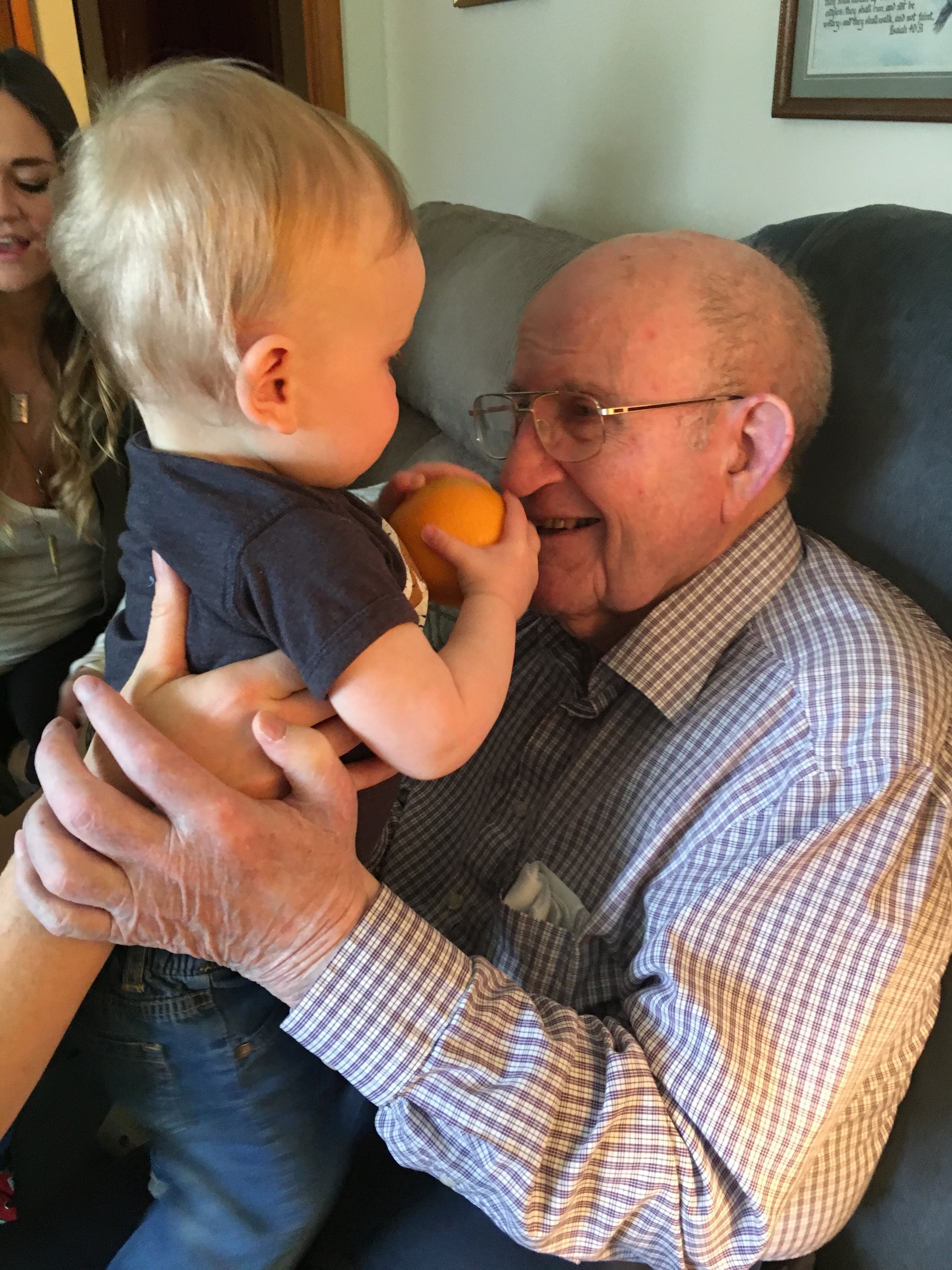 They just stared at each other and Foster kept smiling and it made grandpa smile. I think it was good for both of their souls.

My little man is also funny! He loves to laugh at Hunley or whatever funny thing Aaron and I are doing. He also tries to joke around with us which is just precious!

I’m pretty sure he’s going to get “best personality” superlative in high school. 🙂

The car is still slowly improving but it definitely takes some warming up to. He’ll usually protest when I put him in, so I try to have a toy or snack to distract him. I also keep my eyes peeled for inexpensive things to entertain him with while we’re out and about.  His attention span is pretty short , so he gets bored with things pretty quickly. But, balloons are always a win! 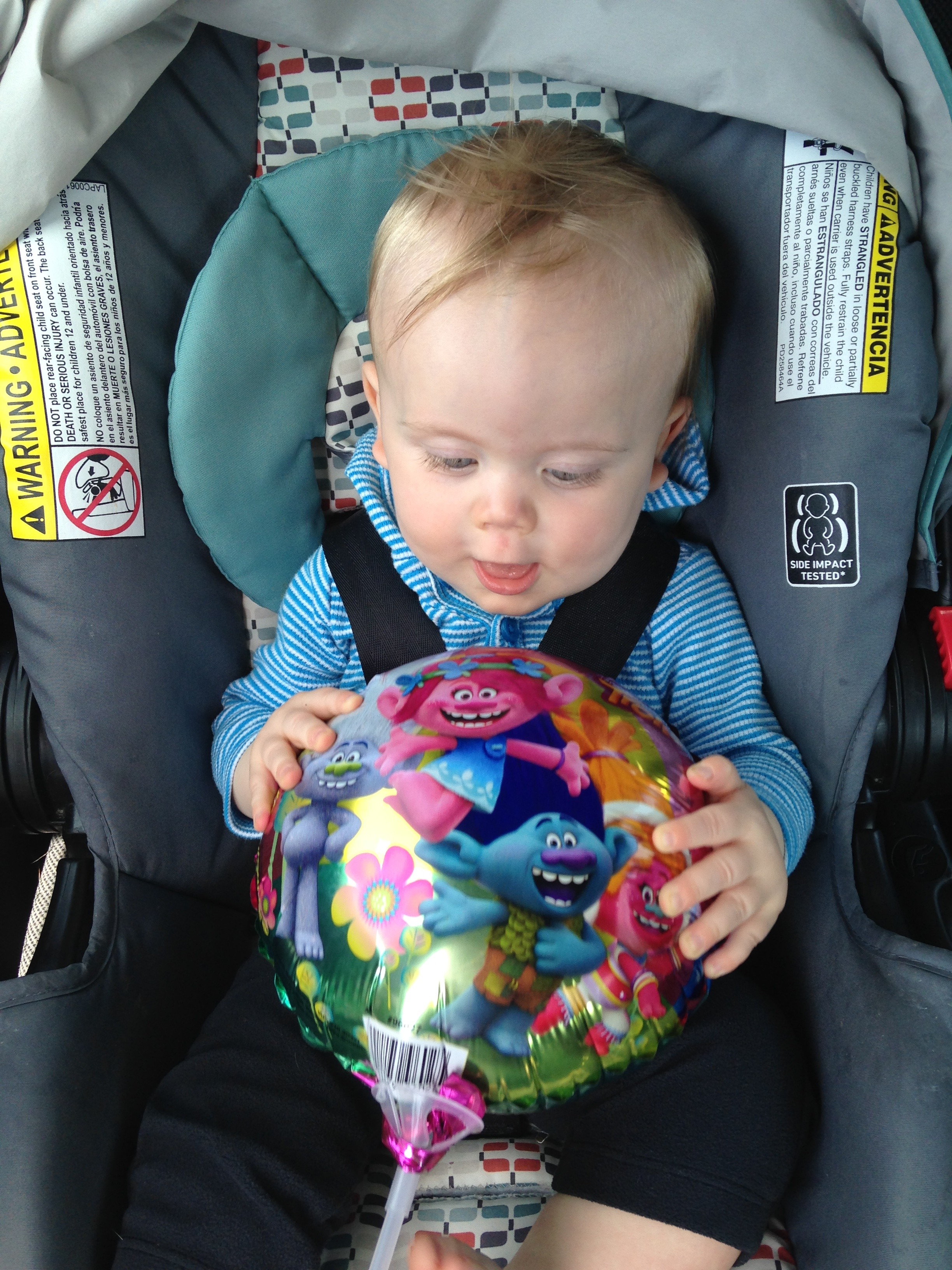 It is crazy that this is my last post before he is a year old!!! One year old!!! I told Aaron time has gone quickly but I feel like we’ve tried our best to enjoy every second of it. This last year with our son has absolutely been the best year of our lives!

p.s. Here’s a little sneak peak on party prep decoration that my sister, Erin, is helping me with!