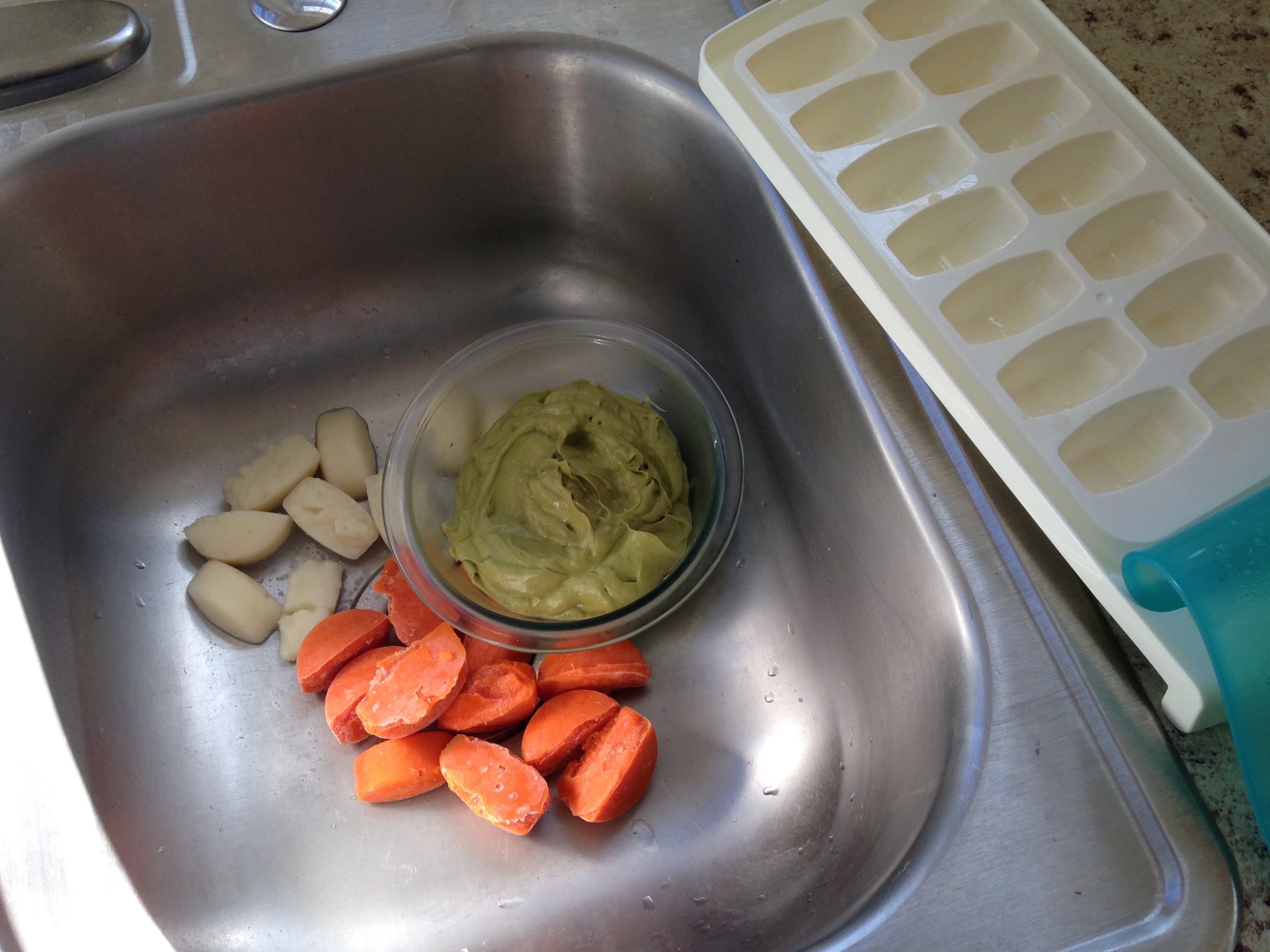 You may be asking yourself, “why on earth does she have all of that food in the sink?” Well, I’m about to drop some knowledge on you. More like common sense but my goober self had to learn the hard way. Ok, story time.

You may recall that I just wrote a post, Newby at Baby Food Prep, about how baby food is not something I planned to make but because of a series of events and choices I decided to make it. I have to be straight up hones here. After I had prepared my son sweet potatoes, carrots, pears and avocado (enough for about a week and a half at least). I stepped back to look at all I had done and felt a little “mommy pride” for once. It was a good and unusual feeling but I welcomed it with open arms. Until…reality set in.

I had just finished feeding Foster pears for the first time and he was not a fan to say the least. I was so confused because he had loved sweet potatoes and carrots, so to not like pears was just unusual to me. Despite him spraying them across the room each time I put a spoonful in his mouth we persevered. Foster had just finished eating or more accurately spitting the pears everywhere. So, when he went down for his nap I went directly to the internet. You see this is where I find my wealth of knowledge or more like the fuel that keeps me worried or inspired depending on the web site I stumble across, it’s 50/50 really. I just had to figure out why he didn’t like pears. I mean they were sweet and delicious. What’s not to like?! I always heard babies liked fruit more, so what gives? 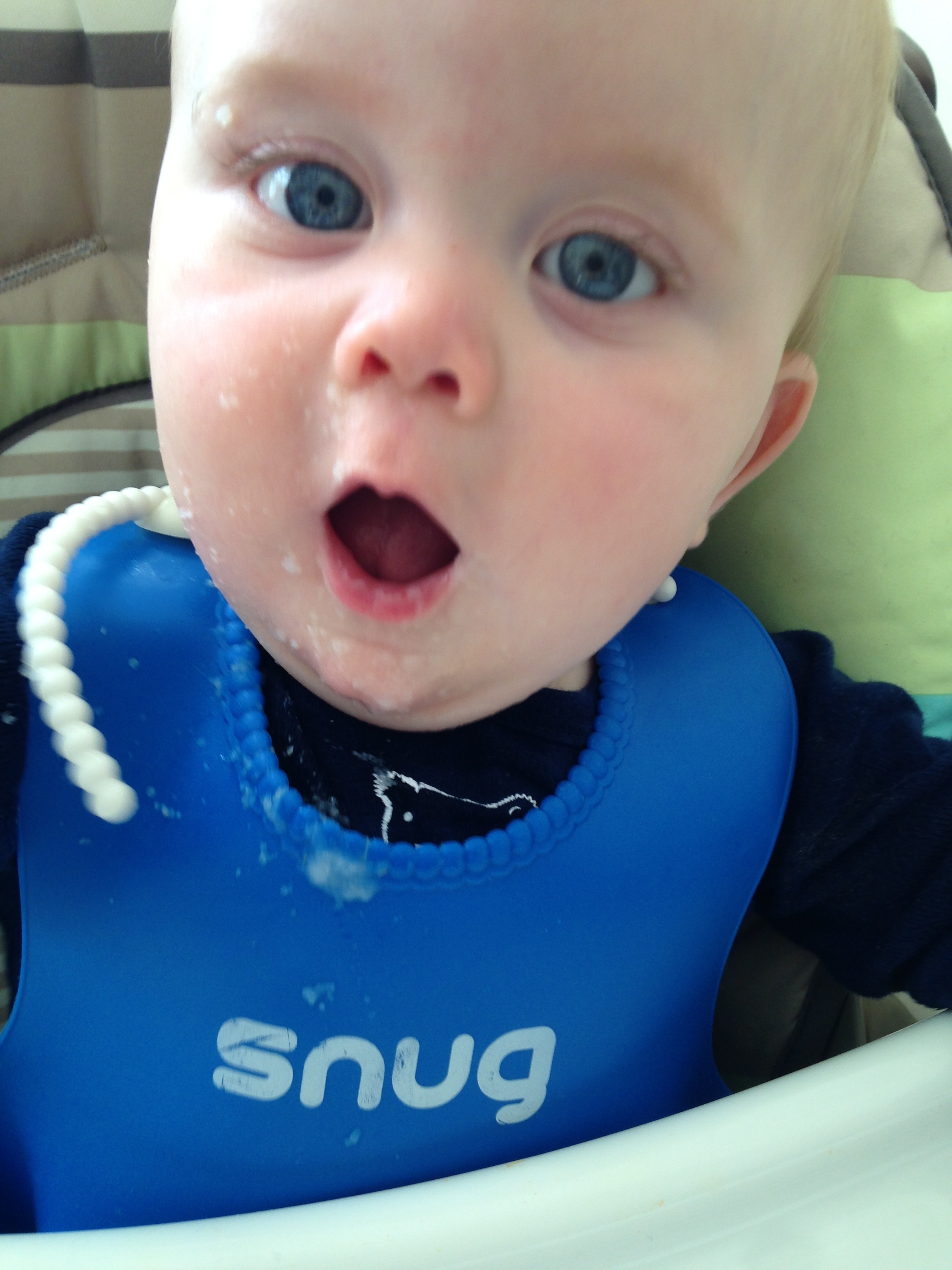 (Also, that bib was a hot mess. I thought it would be brilliant but he kept wanting to chew on that white plastic piece. Not a good idea when you’re mouth is full of pears.)

The only thing I could think of is that I added breastmilk so I could puree it. So, that was my next search, “is it okay to add breastmilk to pears for your baby?” Maybe the two together gave it a spoiled taste…who knows? The possiblilited were just flooding my brain. The first result that came up talked about the importance of not using frozen milk to puree your baby food if you were going to refreeze the food… and there’s your sign! Folks, this is where that so called “mommy pride” I was euphorically feeling a few minutes ago became “mommy guilt” just. like. that.

You see, I had been using my frozen breastmilk to puree ALL the food I had made so far and I proceeded to refreeze ALL the food I made so it would last longer(brilliant, right? No!). So, if you’re doing the math in your head you realize what I did. I effectively ruined every morsel of baby food that I had just made. Might I add that it wasn’t easy to make it since Foster has recently decided that he does not like the blender and he was napping. So, I had taken the blender in our bathroom and would travel back and forth from bedroom to bathroom to add ingredients as I needed them. It was not a Martha Stewart scene to say the least. But…oh yes, there’s a but. Even worse than all that. The refrozen bad baby food is the food I had been feeding my son for the last FIVE days! His first food ever was prepared in a fashion that was not safe! Ahh, I was so annoyed at myself!

I started to freak out just a bit and immediately called the doctor to make sure I didn’t poison my son. The nice nurse on the other end assured me that he would be okay but I shouldn’t do that again. I hung up feeling relieved and ridiculous at the same time. I knew not to feed my son milk that had been thawed and then refrozen. But, for some reason that knowing did not translate into baby food. Well, now I know.

I went to the freezer and disgustedly got out all the little cubes of food I had made and labeled.  I put them in the kitchen sink to melt slowly and sadly. I had a little baby food mourning and then I had to get it together so I could move on! It’s crazy how one little defeat can really mess with your head or it can with mine. The baby food magically began to represent every attempt I’ve made to be a good mom and I just felt like a failure. That’s when all the ugly thoughts start to pour in, so I had to shut it down. There’s nothing good that comes from it.

Before I could effectively shut it down I had to call my husband to vent. I sent him the picture to throw one last little pity party for myself and I’m so glad I did! He was looking at the picture and noticed the avocado in the bowl (I hadn’t even frozen this yet because it was going to be a food I introduced the next week and I had just made it). My brilliant husband said, “you can make guacamole out of that avocado.” You know what?! He was right(words he loves to hear come out of my mouth)! And that’s all it took one little redemption out of my failure. I added a little salsa to that green bowl of goodness and we had taco night. Sure there was breastmilk in it but breastmilk is good for everyone…right?!

So, there ya go. The real story behind my baby food prep. It ain’t pretty folks but it’s reality. I choose to learn from it and make even better food for my sweet son.

Has your mom pride ever turned to mommy failure in a snap (please tell me I’m not alone)?