Toddler life is totally different than baby life. A while back (when I first became a mom) I wrote about 10 Things I Didn’t Know I’d Do With My Baby.

Well, now that we are officially into Toddlerhood I have a whole new list and it’s constantly growing. I tried to pick the top ten that you might relate to or make you think, “at least I don’t do that.”

Because we all need to have someone who makes us feel better about our mom journey. Let me be that person for you. Here we go… 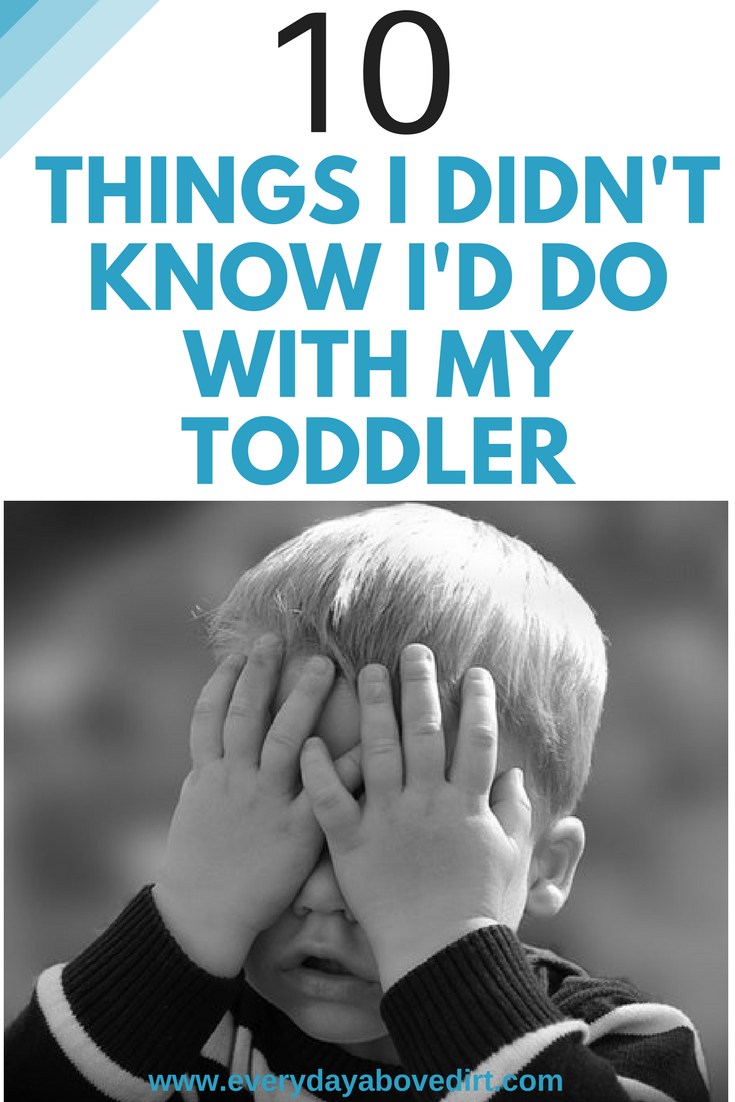 1.Eat foods that were stuck to him/me.-

The first time it happened it was just instinct or I guess kind of out of embarrassment. We were at a library story time and we had just found a spot to sit that was mostly out of the way of others and Foster could still see the reader.

I was pretty happy with my accomplishment(you know, of getting out of the house and all…with minimal tears) then I looked down at my son to see a cracker stuck to his back. Every other little kid looked so put together and polished, but my poor son had food sticking to him.

I quickly (almost naturally) peeled it off and popped it into my mouth. Since then it’s become absolutely natural to me. Almost like my own personal snack time.

We’ll be at the store and I’ll find cheerios stuck to my sleeve, bam, snack time. I’ll see a little Goldfish stuck to his pants. No worries, mamas got it, snack time.

So, yes. I didn’t know I’d be eating food off my toddler or myself. But, I’m pretty down with it now.

2.Wipe his nose with my sleeve, hand or the fastest form of removal.-

Okay, I’m starting to see a theme here because this one also happened out of instinct/embarrassment. I’ve found that when my son has a runny nose it’s an event all in itself.

I have no idea how but his nose acts like producing snot is an olympic event. I can’t keep it wiped or cleaned fast enough. So, naturally I used whatever is nearest to me and that’s usually my sleeve, bottom half of my shirt or my hand.

His snot does not gross me out one bit but other kids snot makes me wanna gag. I would assume that others feel the same way about my child’s runny nose (since it’s not their child). See my logic?! Therefore, I try to take care of it as quickly as possible! So, you’re welcome!

I’m pretty much a Type A person. I like things in their place. Clutter makes me feel claustrophobic and anxious. But, you know what. I’ve had to push myself and adapt to my new mom life. With each task that I want to do I mentally weigh my options.

If I don’t let him pull out all the things from my cabinet while I’m trying to put on make-up he’ll leave the room and get into something more dangerous or he’ll be upset and I’ll need to console him. Both scenarios leading to me not being able to put on a dash of make-up and Lord knows these dark circles under my eyes could use it from time to time.

So, I’ve chosen to embrace the mess (most days). Allowing him to play with (unopened) feminine products or my face cream or whatever random thing he finds under my cabinet that I had no idea was there.

Heck, I’ve even created the mess from time to time. As a former teacher I know the importance of hands on sensory learning. So, on days that I’m feeling extra brave I’ve pulled out some oatmeal, cornmeal, sand, water, bubbles…pretty much whatever I can find and I’ve let him experiment with it.

But, these are on my really brave and emotionally stable days. That Type A is still in there. I just have to keep her in check.

I have to admit before having kids I kind of viewed “time out” as a joke. I grew up with spankings and in my opinion that got the point across to me pretty clearly, so I always just thought that’s what I would do too. Well, enter your own parenthood journey(you know when it’s real life instead of just hypothetical) and everything changes.

First of all I can’t bring myself to spank my son. That might change when he’s older and can understand why and all that jazz. But, for now I just don’t think it would translate. So…

Time-outs are my number one form of discipline. Of course I redirect, give him other options and teach him what is and is not acceptable. But sometimes when you get a slap in the face for what you think think is no reason. A time-out is needed for both mother and child.

5.Embrace my back seat being a literal chex mix dish/toddler buffet-

Oh, car rides. We have had a termoltuous relationship since my son has been born. Early on (the first year of his life) car rides were absolutely the worst!!

He could not stand being in his car seat and he let me know every second of our drives. I dreaded being in the car and so did he.

Now days I’m elated to report that car rides are WAY better!! I might even go as far to say he enjoys them! But, one huge factor in the enjoyment is snacks!! The beloved snacks that bring peace to all the land.

I always come equipped with teething biscuits, Cheerios, Crackers or other non choking hazard foods. But, let me just say it has changed everything. He’ll sit back there and graze while looking out the window and I can get us to where we are going without tears rolling down his face and sweat rolling down my back.

BUT, there is a price. My back seat literally looks like a Toddler Buffet. Again, this challenges the Type A part of me but I have to choose my battles. I’d much rather have a messy back seat and a happy child than a screaming one. So, bring on the toddler snacks!

6.Go to the bathroom while a little person stared right at you (I’m talking eye contact).-

Oh my goodness! This one gets real, real quick. I have been sharing my bathroom time with Foster since he was born. When he was a newborn I would wear him in my carrier or hold him in my arms (it’s crazy what moms can do with babies in their hands).

Well, now that he’s older. He still likes to be with me but now he just stares right at me. I try to use the time wisely and talk about how he is going to go potty soon too. But, there’s only so much education you can bring to a bathroom trip. So, gaze away little man.

7.Breastfeed as long as possible.-

When I first started breastfeeding it hurt SO bad and I didn’t know how I was ever going to make it. I didn’t have “the hold” down. He kept slipping off my boob, it hurt, we did it all the time and I wasn’t sure I was doing it right. I thought I would be thrilled when our nursing days were over.

Then he turned a year old and I started to cherish this time. It was a time that he would actually be still and let me hold him. This mama loves cuddle time.

It’s just such an innocent and beautiful experience, so I decided I would breastfeed him as long as he wanted me to (I mean I would have stopped before he went to Kindergarten ;)).

But, there was no need for me to stop anything. When he was 18 months old he said, “no” and shook his head at me when it came time to nurse. There’s my sign.

I had such mixed emotions about it. On one hand I was so sad because I kind of felt like he didn’t need me anymore. I realize that’s a lie and a weird way of thinking but that’s how I felt. But on the other hand I could take medicine and not worry about it affecting my milk. So, yes I miss the thing I thought I’d be so thrilled to stop doing.

8.Offer so many different foods.-

I’m not one of those people who just love cooking. I wish I did but I don’t, so I have to really work at coming up with different things for my son to eat.

But it never fails. I do all the research cook so many different healthy food choices and he’s not having any of them. Soooooo, I end up feeding him mac and cheese all the days.

Dancing is not one of my spiritual gifts. It ranks right up there with singing. Both are usually a no fly zone for me. Why would I willingly do something that I know I look/sound ridiculous doing?!

Cuz my son loves it, that’s why! His little face absolutely lights up during our little “dance sessions.” All of a sudden I don’t care how spastic I look because it makes him so happy.

The down part is that I’m most likely teaching him to dance like me. His only hope is his dad. He can cut a little rug!

10.Use bribery to get a diaper changed.

Bah, I get annoyed just writing this one. Before having kids I always thought I would never bribe my children. They would just do what I wanted them to do because I’m the mom and I said so…right?! Wrong!!!!

Related: 10 Reasons I Judged Parents Before I Became One

Diaper changing/clothes changing is always a battle. I’ve tried to use the mom voice and I’ve even pulled out my teacher voice and looks(now those are scary). But, to my surprise none of those have worked. So, I’ve resorted to bribery.

It usually comes in the form of PBS Kids videos but I’ve also tried snack, toys and books. I’ll pretty much do what I need to do to get a clean diaper and clothes on him without getting kicked. But, it’s always more than worth it (I mean look at that sweet face)!

There you have it mamas. Life is constantly changing and I’m continuously adapting to what I need to be/do in order to enable my son to have the best life possible. Although, it usually involved pushing me out of my comfort zone. I also know it makes me a better person. I’m so grateful to be a mom. Especially to my amazing little toddler (p.s. It’s so crazy that he’s a toddler)!