I did it. I’m guilty. I judged parents. BUT, I did it before I was a parent myself. That’s very important for you to know.

Judgment is such a tricky thing. We don’t want people to judge us yet we judge others almost like it’s a natural part of being human.

In fact I Googled it and Google says that it is human nature (I’m sure some would debate that). But regardless, I’m ashamed to admit that I have judged parents in the past and Lord knows I’m in no position to judge others.

This specific judgyness(I know it’s not a word) that I’m speaking of was directed at parents with young kids.

But, I feel the need to repeat it again. I judged parents BEFORE I was a parent. Also, you need to know that it was never out of ill intent. They were just thoughts that popped in my head.

It’s easy to judge someone when you haven’t walked in their shoes or you’re not the one with a screaming toddler attached to your leg. So, I wanted to come out and apologize for judging you parents.

I know better now. Now, if I see a parent that is picking up all the boxes that were knocked over by their toddler in aisle 12 at the supermarket I’ll go over and help her pick up the boxes and wipe here tears. And I’ll probably cry too because who doesn’t need a good cry?!

But, the pre-parent version of me was kind of a jerk. 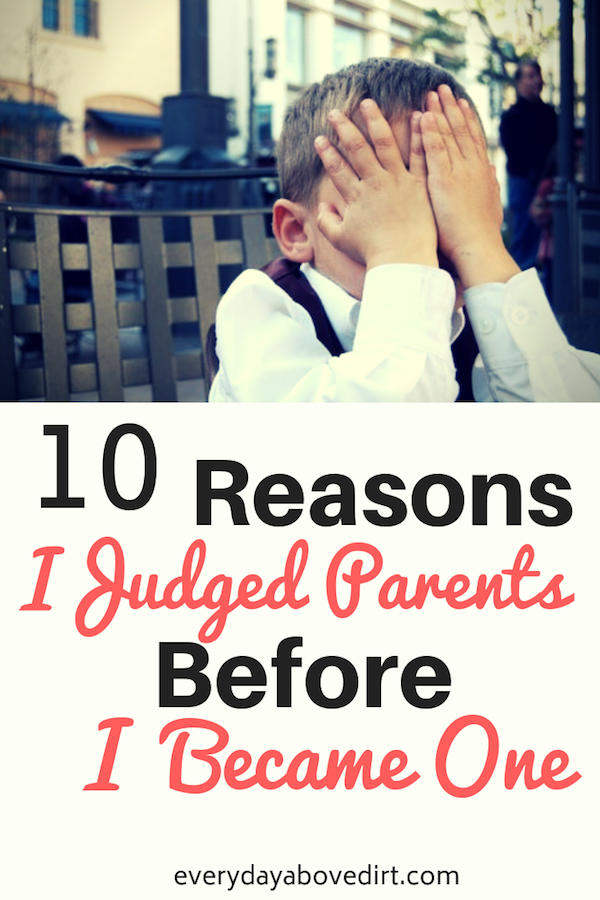 10 Reasons I Judged Parents Before I was One

Before Being a Parent: I always thought, “I can’t believe they just gave them a cookie so he would stay in the shopping cart. The child should just stay in the cart and sit quietly because the parent said so.”

Now that I am a Parent: This is what I do-pack literally every type of snack known to man every time we go to the store. I’ll offer them throughout our shopping trip just to get my son to stay seated.

Suprisingly, he doesn’t just do it because I said so. What’s up with that?!

*I know this one is controversial but just bear with me and understand it’s from a light hearted place.*

Before Being a Parent: I always thought, “That is absurd! Who would put a leash on their child as if they are an animal.”

Now that I am a Parent: I think, “that is a brilliant invention that can save lives.” I still haven’t tried this and I don’t think I will but then again, never say never. Although, I do see the value of making sure your roaming toddler is secured right next to you. Especially at busy places!

Before Being a Parent: I always thought, “I can’t believe they are letting their child just scream. Why don’t they tell him to stop?!”

Now that I am a Parent: This is what I do-immediately freak out and abandon whatever items we might have had in our cart and vacate the building. I’m working on getting more confident during screaming/breakdowns and instead of immediately leaving I’m trying to talk to him about what’s going on, but it’s a work in progress.

I’ve painfully learned over and over again that they don’t just stop because you tell them to. Shocker!

Before Being a Parent: I always thought, “Do you really have to plan your entire day around your child’s nap? It can’t be that big of deal. Just let them sleep in the car. ”

Now that I am a Parent: This is what I do – plan every. single. day around nap time. We have to be home during nap time because car naps ruin everything and heaven forbid if we miss an entire nap. The whole day goes in the pooper. Sleep/naps are the biggest deal ever and I’m embarrassed I ever thought otherwise.

Related: How We Finally Got Our Baby to Sleep!

Before Being a Parent: I always thought, “If you want to go out to lunch with your friends, just go. Your child will adjust.”

Now that I am a Parent: This is what I do – schedule everything I do around my son’s schedule. I’ve learned that a schedule and the expected mean safety to him. So, if it’s not in our schedule we’re just not doing it. You gotta pick your battles.

Now, I totally understand why my parent friends had to say no to lunch. 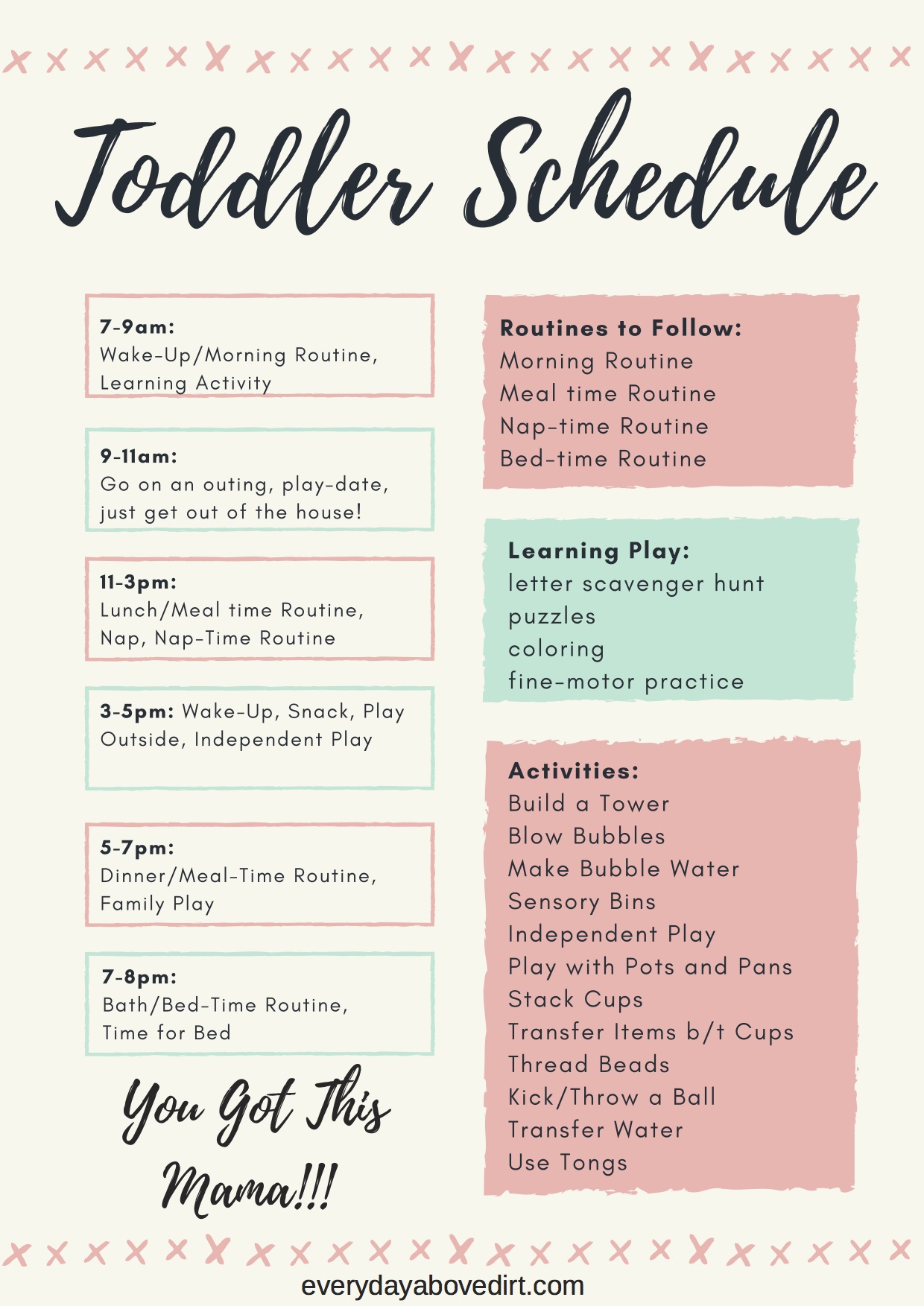 Before Being a Parent: I always thought, “If you want to go on a random road trip or you get a good price on flights just go where you want to go. All you need to do is take the car seat and you’re set.”

Now that I am a Parent: This is what I do – NEVER TRAVEL(at least not yet)! I mean, we did once but it was just no good. I ended up getting sick and my son did not sleep the entire night unless he was on me. I now also realize the time effort and preparation that needs to go into any sort of trip.

Even if it’s just a trip to the grocery.

Before Being a Parent: I always thought, “can’t the kids play in the front yard or can’t you just leave them with a babysitter?”

Now that I am a Parent: This is what I do – never ever, ever, ever let my son out of my site. I am a mama bear to the 10th degree. It’s like as soon as my son was born I was suddenly aware of all the danger in the world and how it was my responsibility to protect him from it.

Before Being a Parent: I always thought, “Germs aren’t that big of a deal. They just build up your immunity.”

Now that I am a Parent: Germs are everywhere and I must have all the sanitizer everywhere I go. I have even rubbed sanitizer on my son’s clothes. OCD? Maybe, but at least I got some germs off of him. Because it is the absolute worst when your kids are sick!

Related: 10 Things I Didn’t Know I’d Do With My Baby as New Mom

Before Being a Parent: I always thought, “Why don’t you wash off your child’s face. It’s not that hard.”

Now that I am a Parent: This is what I do – there are literally not enough wet wipes in the world to keep my son’s face clean 24/7. So, I end up just letting it be or using my spit on fingers method.

Restaurants (the mess on the floor)-

Before Being a Parent: I always thought, ” I cannot believe those parents let their kids get so much food on the floor. Can’t they teach them manners and how to eat with a utensil?”

Now that I am a Parent: This is what do – apologize profusely for the atomic mess we made under that table (because manners and utensils are hard) or just leave before anyone sees us.

**Updated: Since I wrote this post I came up with the Toddler Restaurant Kit that I literally take with us every time we go out to eat. It’s an absolute game changer!!**

It’s true what they say, being a parent makes you a better person. Now I am much more aware of what an ignorant, turd I was. I mean, who did I think I was?! The before parents thought literally make me LOL.

To all the parents out there please accept my deepest apologies and to all you people who aren’t parents yet…don’t you dare judge us(but if you do don’t worry about it too much because it’s human nature, Google says)!

The moral of the story, lets all show each other a little more grace and understanding. Because we are tired and have no idea what that other person is going through!